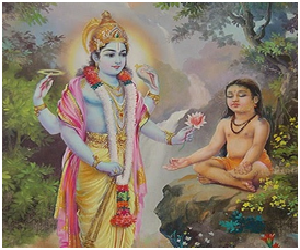 Similar to chanting the names of the almighty, we can also chants the names of his devotees like Prahalada, Dhruva and Markandeya, and sages and saints like Vasishta, Atri, Viswamitra, Raghavendra, Shirdi Sai Baba and Kanchi Paramacharya. In most of the houses, we can see the pictures of the above mentioned saints, and they would worship them similar to the great almighty. Actually there is no difference in worshipping the almighty and the saints, since saints and sages contain the features of the god, and they also acts as a mediator between us and the god.

In fact, god itself wants us to approach him only through a holy guru. As per the sayings of Lord Krishna in his Bhagavat Gita, “Among the demons, I am the mighty Prahalada. Whoever worships him, can be treated as my best devotee”. Similarly god dwells in the hearts of the holy sages. Sages contain great powers, and the great Sage Sri Viswamitra had created a separate heaven itself for his devotee Trishanku, through his spiritual powers.

Bhagavatas are sincere devotees of the god, and they lived their life in a pious and noble manner. Their mouth would always chants the glories of the god, they used to consider good and bad as equal, and contain willpower in order to face any kind of challenges in their life. This they have                   got only through their utmost devotion on the god, and after facing many difficulties in their life only, they were able to live their life peacefully. But at present just by worshipping the god for some few minutes, we expect him to fulfil all of our wishes. But the Bhagavathas would never pray to the god for themselves, and they used to pray to the god only for the wellbeing of the living beings in the entire world.

For several years, I am chanting the mantra, “OM SRI BHAKTA PRAHALADAYA NAMAHA, and due to that, somehow, I am able to push my life due to the grace of Guru Raghavendra, who is an incarnation of Prahalada. Hence, let us generate more bhakti on the Bhagavathas and let us keep chanting their names throughout our life, in order to get a blessed life.