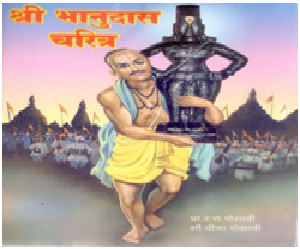 Bhanudas (1448–1513) was a Hindu saint of Maharashtra, who was well known for bringing back the sacred idol of Lord Vithoba  from Vijayanagar to Pandharpur. He was the great grandfather of Sant Eknath. At his younger age, he used to worship Lord Surya Bhagavan, and after he has seen the divine appearance of Lord Vithoba in his dream, he became his ardent devotee. He was mentioned in the Bhaktavijaya, written by the great Saint Sri Mahapathi.  His Samadhi is situated near Vitthal temple at Pandharpur.

Similar to Sri Eknath, he was very much attracted with Lord Vitthal and sung lot of Bhakti songs on him. He is considered as a famous Varkari poet and saint of Maharashtra, similar to other Vittal devotees like Gorakumbhar, Chokamela, Sakkubai, Dyaneshwar and Narsi Mehta.

His songs would melt the hearts of the Vittal devotees, and was highly praised by the kings and also by the common man. He also received lot of wealth for his divine songs from the kings, but he utilized the money for building and renovating Hindu temples.

Some of the verses from his songs are as follows:

“OH LORD PANDARINATHA, I WOULD NEVER FORGET YOU TILL MY LAST BREATH! PLEASE KEEP ME UNDER YOUR FEET, AND GIVE ME THE CHANCE TO PERMANENTLY STAY WITH YOU! OH VITTALA, VASUDEVA, KESAVA, MADHAVA, MADHUSUDHANA! I DON’T WANT TO THINK ABOUT ANYTHING IN MY LIFE! BUT EXCEPT TO PRAISE YOUR GLORIES AND TO SING BEAUTIFUL SONGS ON YOU!

Let us worship the divine saint and be blessed.