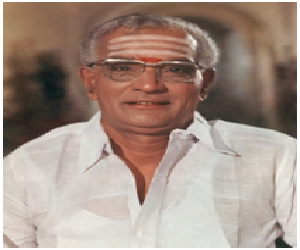 Chinnappa Devar (1915–1978), also fondly called as Sandow Chinnappa Devar by his fans and by his well-wishers, was a famous and active Tamil film producer during the period: 1950-1970. He is very fond of animals, and hence he produced a few animal based movies, and also made some animals to act in his movies. Chinnapa Thevar married to a pious lady at his teenage, and he had children.

He produced all of his movies under the banner Devar Films, and he contains a strong body and a strong mind. He was a staunch devotee of Lord Muruga, and he also produced a few films based on Muruga Bhakti. Though he was in film Industry, he lived a disciplined life, and he didn’t have any bad habits.

Chinnappa Thevar was born in Coimbatore to a pious Thevar community couple. His father owned a few farm lands, and engaged in agriculture activities.

Chinnappa thevar didn’t finish his schooling due to poverty, and at his young age itself, he worked in a mill based at Coimbatore for a meagre salary. He was a hard worker, and he was interested in body building. He also learnt martial arts in order to develop a strong body.

Before starting his own film industry, he had acted in small roles in some Tamil feature films.

Chinnappa thevar maintained a strong relationship with Sri. M. G. Ramachandran, the supreme film personality and the ex-chief minister of Tamil Nadu. He has produced lot of films featuring M. G. Ramachandran, and made most of the films into success. Apart from MGR, he also maintained good relationship with all other leading heroes during his period.

Devar is a very generous person, and he spent lot of money for charitable purposes, and he also contributed lot of money to the temples of Lord Muruga. He treated all the film artists with great respect, and he had especially given good respect to all the women artists.

During the year 1978, Devar died due to chest pain, on the day of Kanda Shasti festival day.

Due to his kind attitude and selfless nature, still lot of old people are praising him.