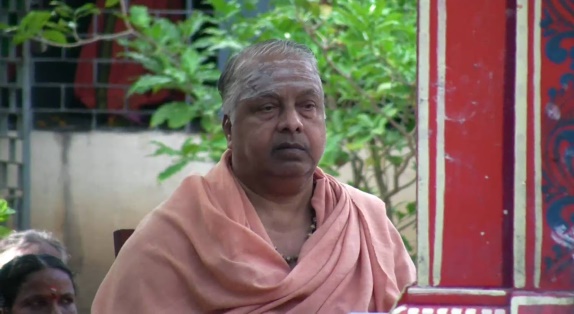 INTRODUCTION
Gnanacheri Swamigal has lived in Chennai, and his Shrine is situated at Sithalapakkam, Chennai near Pasupatheeswarar temple, and lot of devotees are visiting his holy Samadhi shrine. He is a sincere devotee of the great saint Sri Sadasiva Brahmendra Swamigal. We can also visit Sri Raghavendra Swamy Temple at Sithalapakkam situated near TNHB, and can get his blessings also. Gnanacheri Swamigal had left his physical body only a few years ago, but it is believed that he still lives in the hearts of his sincere devotees and blessing them throughout their life.
Swamigal had performed lot of miracles in the lives of his devotees. Few of the miracles are as follows:
1. He cured the heart attack of a devotee during the midnight through his gentle touch.
2. He relieved the mental diseases of a devotee, who had become mentally disturbed, after his parents death.
3. He protected the women devotees during their travels, and safeguarded from evil elements.
4. He appeared in the form of a saint and gave food to the hungry devotees during their travels to holy places.
5. He helped the student devotees to secure good marks in their exams.
6. He had safeguarded his devotees from accidents.
7. He had safeguarded the devotees from suicides.
8. He healed the dreaded diseases of the people by giving sacred ash of Lord Shiva to them.
9. Regularly he used to pray to Lord Shiva for our welfare.
Likewise, he has done lot of goodness in the life of the devotees, and made them to reach the spiritual path. He insists us to regularly worship the gods in their temples, in order to control our senses, and to fill up more positive thoughts in our mind. He also asked the devotees to do yoga and meditation for their wellness.
Let us worship the great saint and be blessed.
“OM SRI GNANACHERI SWAMIGALE NAMAHA”
“OM NAMAH SHIVAYA”
“OM SRI SAKTHI DEVIYE NAMAHA”
WRITTEN BY
R.HARISHANKAR