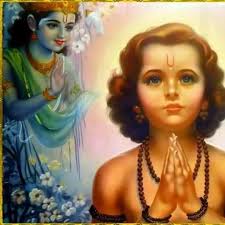 INTRODUCTION
Prahalad was a child devotee of Lord Vishnu, and his bhakti on god is unimaginable and unthinkable by us. He showed his selfless devotion on the god, and in return, he has been safeguarded in several circumstances by the divine power, and got all kinds of riches in this world. He lived a holistic life, and never afraid of any bad things happened behind him. His thoughts were entirely about Lord Vishnu only and never thought about unwanted things in his life. He lived for several millions of years, due to the grace of Lord Vishnu.
Once he has lost his kingdom to his own cousin, but even then he didn’t get upset, but instead of that, he started meditating on Lord Vishnu, and in course of time, he defeated his cousin and regained his position, and become the king for the big kingdom. Though he belonged to Daitya sect, he lived a noble life similar to the Divine Devas in the heaven, and he contains an attractive appearance with a shining face, and glitters like a sun.
During his period, daily he used to provide food to a minimum of 1000 people, and then only would have his food. In his regime, all the daityas were moved with others in a gentle manner, and they didn’t give troubles to others. According to legend, once several travellers were wrongly crossed the area of the Daityas, since they were supposed to reach some other place, and suddenly they have been surrounded by several demons.
They got very much afraid, and begged to leave them. But the demons calmed them, and took them to their king’s palace. There they have seen Bhakt Prahalad, who looks very beautiful, and he was dressed in royal clothes, and wears several kinds of precious ornaments. He has given a warm welcome to the travellers, and offered them rich food, and made them to stay for some days in his palace, and while they were about to leave, he gave them costly gifts and safely send them to their desired places.
Like the above incident, lot of good incidents were happened during the regime of Bhakt Prahalad, and his name and fame would remain constant even after the end of several yugas.
Let us worship the great Bhakt Prahalad and be blessed.
“OM SRI BHAKTA PRAHALADARE NAMAHA”
“OM NAMO NARAYANAYA NAMAHA”
“OM SRI GURU RAGHAVENDRA SWAMIGALE NAMAHA”
WRITTEN BY
R.HARISHANKAR