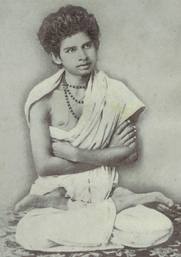 INTRODUCTION
Prabhu Jagatbandhu was a great saint and an ardent devotee of Lord Krishna who was born in the year 1871 in a village in Bangladesh. He was very much attached with Lord Krishna and Chaitanya Mahaprabhu and used to sing melodious songs on them.
Jagadbandhu was a Vaishnava Philosopher and spent most of his time in doing meditation and preaching the Bhagavat Gita, Bhagavatham and other holy texts at his Sri Angan ashram in Faridpur, Bangladesh. He was the founder of the Mahanam Sampraday sect.
He stressed the people to realize the importance of God by making regular prayers, pujas and doing meditation. He insisted his followers to control their senses in order to avoid wrongful acts, and to concentrate their attention towards devoting to Lord Krishna. He attained divine powers through his good characteristics and considered as a holy and a pious person among the saints. He also visited several holy temples and worshipped Lord Krishna, and journeyed throughout India to spread the bhakti spirit among the people, and to make them to live a stress free life. Once he got the darshan of Lord Krishna and Chaitanya and received blessings from them.
Due to his simplistic and holistic approach, he was admired and praised by the kings and the general public. He got large number of followers who spread his messages among the people. He lived a simple life and insists the people to frequently chant the holy names of Lord Krishna, in order to attain the eternal bliss of the Lord. Through his powers, he removed the sins of the people and gave them peacefulness, happiness and all sorts of prosperity in their life.
Let us worship the holy saint and be blessed.
“OM SRI JAGADBANDHU PRABHUVE NAMAHA”
“JAI KRISHNA”
WRITTEN BY
R.HARISHANKAR