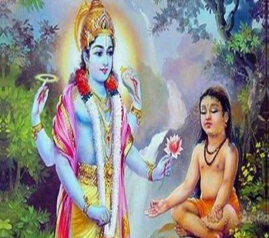 Dhruva is an ardent devotee of Lord Vishnu, and he was praised in the Vishnu Purana and in the Bhagavatha Purana. Through his sincerity and purity, he has become a shining Dhruva star in the skies, and for him, there is no end. Divine discoursers would frequently mention his name during the time of their Bhagavatham Discourses. He acts as an example for others, and by reading his life history, we can develop more and more bhakti on Lord Vishnu similar to him.

Dhruva was born to king Uttanapada and his wife Suniti. But the king has shown more love and affection only towards his second queen Suruchi, and her son Uttama, and ignored his first wife Suniti and Dhruva. One day when Dhruva tried to sit on the lap of his father Uttanapada, Suruchi pushed him down and also drove him out from that place. Due to that, Dhruva had become very upset, and went straight to his own mother Suniti and narrated the entire incident to her. Suniti consoled her son, and asked him to perform penance on Lord Vishnu in order to attain all sorts of goodness in his life.

As per the saying of his mother, Dhruva went to the forest, and there he met Rishi Narada, received blessings from him and began to vigorously perform penance on Lord Vishnu even without taking proper food and water. At last after a few months, Lord Vishnu had appeared before him, and granted him the position of becoming the Dhruva Star.

VISIT TO HIS FATHER’S KINGDOM, BECOMING A KING AND THEN BECOMING THE DHRUVA STAR

After getting the darshan of Lord Vishnu, Dhruva went to the palace of his father, Utthanapada, and there he was warmly welcomed by his father and mother, and even by his father’s second wife, Suruchi, and he was suitably honoured by everyone. In course of time, Dhruva had become the king for the region and he successfully ruled over his kingdom for several thousands of years. After the end of his life, he has become a powerful Star, and he is known as Dhruva Star, and along with him, his mother, Ma Sunithi is also believed to live in the Dhruva Loka.

SIGNIFICANCE OF THE DHRUVA STAR

Since Dhruva is blessed by Lord Vishnu, he has attained a very good position in the upper worlds. He would live even during the time of Deluge, he is independently functioning in his Dhruva loka, and no one can control him. Through his divine powers, he is controlling the entire planets, even the sun and the moon, and he is controlling even the Sapta Rishi Mandala.

During night time, we can easily watch the Dhruva star in the skies with our naked eyes, and he would shine more brightly than the other stars. Whoever read the life history of Sri Dhruva, would be blessed by Dhruva and by his mother Ma Suniti, and also by Lord Vishnu, and they would attain all sorts of prosperity in their lives.