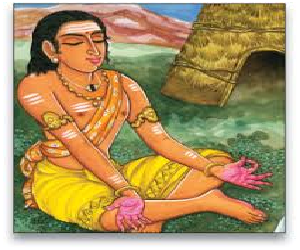 Pakazhikuttar, though he was born as a Vaishnavite, become a staunch devotee of Lord Muruga, since according to his opinion, both Lord Vishnu and Lord Muruga are one and the same. When he performs meditation on Lord Muruga, he used to sit like a tree without shaking his body. Even if insects like ants and spiders bite him, he didn’t bother, but used to concentrate his entire attention only on Lord Muruga. Once he went to Tiruchendur Murugan Temple, and at the request of a devotee, he sang Murugan Pillai Tamizh songs and relieved his pain.

Pakazhikuttar travelled to all parts of Tamil Nadu, and propagated “MURUGA BHAKTI” amongst the people by the way of singing divine songs on Lord Muruga. He used to conduct spiritual discourses on Muruga Puranam, and made the viewers to realize, that Lord Muruga is the first and foremost god among all others. He never concerned about his health and wealth, but concerned a lot about the welfare of the people. He requested the kings and the rich landlords to feed the poor Muruga devotees three times a day, and also constructed small houses for them.

He also had the divine vision of Lord Muruga for several times, and become a slave to Muruga. At the time of his death, his followers and disciples and the general public were noticed, that a divine spark had appeared from his head, and reached the sky. It is believed that similar to Ramana Maharishi, he also had attained salvation.