In: Devotees, Music
With: 0 Comments 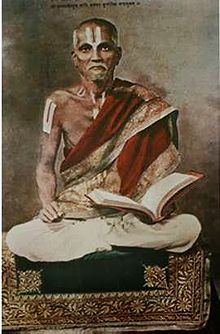 INTRODUCTION
Poochi Srinivasa Iyengar (1860-1919), was a great singer and composer of Carnatic music and he sang several songs in praise of Lord Rama, and he was an ardent devotee of Lord Rama and also the devotee of the great divine musicians Rishi Narad and Tumburu. He was born in a Hindu pious Iyengar family in Ramanathapuram in Tamil Nadu in the year 1860.
He studied music under  a great scholar and become a divine singer and used to compose songs similar to the great Saint and Rama devotee Sri Thyagaraja Swamigal. He got large number of disciples and among them Ariyakudi Ramanuja Iyengar is the famous Carnatic musician. He also guided his disciples in the path of music and made them to compose divine songs on Lord Rama and he lived a noble life. He used to give discourses on Ramayan to the devotees in the temples. He was a kind hearted person, who used to write poems on Lord Rama in a simple manner, and his poems can be read even by an illiterate person. He composed more than 100 songs on Hindu deities and he died in the year 1919, and took shelter under the lotus feet of Lord Rama.
Let us praise the great musician and be blessed.
“JAI SRIRAM”
WRITTEN BY
R.HARISHANKAR