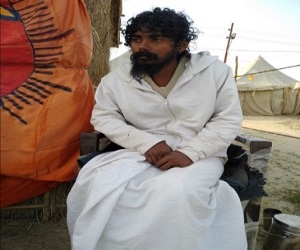 Sant Aatmabodhanand is an ardent devotee of Mata Ganga Devi, and similar to Swami Sanand, he is also interested in cleaning the Holy Ganges River by removing the dirt and pollution from it, and also he wants the hydro-electric projects to be stopped, in order to ensure free flow of the Ganges River.

According to him, the Holy River Ganga is our divine mother, and by bathing in the sacred river Ganges, our sins would be washed away. He tried his level best for the protection and conservation of the sacred River Ganga. Sant Aatmabodhanand has observed fasting for a few days during the year 2018 in order to see the free flow of River Ganga, without any interruption.

Even though, he is a Computer Science graduate, due to his spiritual thirst, he has become a saint at the age of 22 years under his Guru Shivanandji of Matri Sadan and dedicated his life by worshipping Ma Ganga, and he wanted to see the Clean and pure River Ganges. After the death of Swami Sanandji, Sant Aatmabodhanandji demanded the Government to fulfil the dreams of Swami Sanandji, by taking proper steps to clean the debris stored in the River Ganga.

Mata Ganga is a sacred river and she is also worshipped as a powerful goddess by the Hindus. Lot of pilgrims used to take bath in River Ganga, and the ashes of the dead bodies would be immersed in River Ganga, by believing that, by doing so, the deceased people would attain Salvation.

Mata Ganga is considered as an incarnation of Mata Parvati. Due to the great efforts of King Bhagiratha, she had come down to the earth from the abode of Lord Shiva. Small and big temples of Mata Ganga are situated throughout India. By worshipping the holy mother Ma Ganga, our sins would be removed, we would become pious, and we would prosper in our life.

Let us chant the mantra, “JAI GANGA MA” and be blessed.