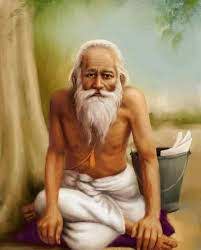 INTRODUCTION
Sant Nenuram, who was born in the year 1898 to a Hindu family in Islamkot in Pakistan, had left his home at his teenage, in order to travel in the spiritual path. He was a staunch devotee of Lord Rama, and similar to Shirdi Baba, he was liked by the Hindus and the Muslims, and according to him both Lord Rama and Lord Allah are one and the same.
After performing penance for a few years, he returned to his native place, and started a big kitchen in order to serve food to everyone irrespective of their religion, caste, creed and gender.
Sant Nenuram Ashram is located in Islamkot, and it was constructed by his follower, Sri Nihalchand Pabani by collecting funds from the local people. Every day free meal is served for two times in a day, throughout the year in Sant Nenuram Ashram at Pakistan.
Every year, a three-day festival would be celebrated during September – October by both Hindus and Muslims in the Ashram of Sant Nenuram, in order to honour the great Saint. Thousands of devotees used to attend the festival at Sant Nenu Ram Ashram in Islamkot. The Temple management has been providing free food to all the visitors irrespective of their caste, creed, gender and religion, through the donations received from the devotees.
Muslims in Thar District stopped slaughtering cows in order to show their respects to the great Saint Nenuram, and they also used to visit the Ashram regularly.
TEACHINGS
1. See the divine in the face of everyone, and don’t disrespect others.
2. Don’t get angry over others.
3. Call the almighty for help. He is within your reach only.
4. Be a slave to the god.
5. Don’t differentiate people based on their religion.
6. Remove the evils like ego, lust and fear from you.
7. Do lot of charitable activities.
8. Provide food to the poor and the down trodden people, and also to the animals and birds.
9. Realize the god in your soul.
Let us worship the great saint and be blessed.
“OM SRI NENURAM NAMAHA”
“JAI SRIRAM”
WRITTEN BY
R.HARISHANKAR