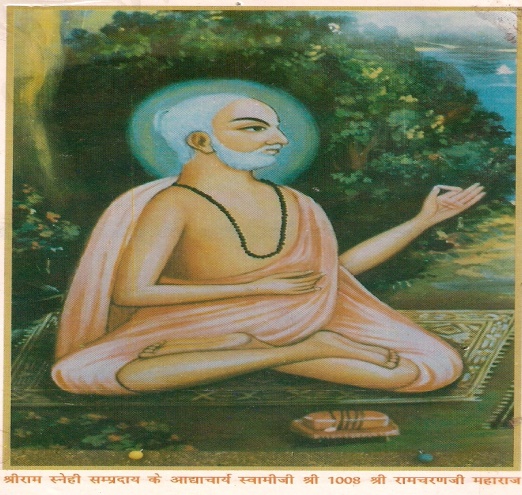 Sant Ram Charan (1720–1799) is the founder of Ramsnehi Sampradaya for initiating Rama Bhakti, and to spread the greatness of Lord Rama amongst the people. He is a sincere devotee of Lord Rama, and used to regularly chant the Rama Mantra, “JAI SRIRAM” throughout his life. Ram Charan was born in a village in Rajasthan in the year 1720, and his birth name was “Ram Kishan”. Charan got married to a noble lady and became the Divan of Jaipur.

At his teenage, due to the grace of the almighty, he lost interest in leading the normal life of a family man and hence, he resigned his job, and left his house, and began to travel throughout Rajasthan. On one fine day, he found a holy saint “Kripa Ram” in a village in Rajasthan, and he became his disciple and listened to his spiritual teachings. As per the advice of his guru, he performed penance in a cave for a few years, and attained spiritual enlightenment. After finishing his penance, he performed many miracles in the life of the people and became very popular amongst the Rajasthani people.

Ram Charan was against caste discrimination, and he wanted all castes of people to enter into the temples, and worship the divine deities in a wholeheartedly manner. His philosophy was that to love the God, and not to question him. According to him, god knows fully about us, and our prayers would get answered at the appropriate time. Ram Charan has asked his devotees to worship the god in their heart, and also in the temples, and to provide food to the hungry people. He was a very kind and an affectionate Guru, who had dedicated his entire life towards propagating the praise of Lord Rama.

Let us worship Swami Ram Charan and be blessed.