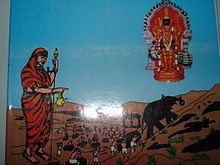 Sivakami Ammaiyar is a staunch devotee of Lord Muruga, and she was born in Neduvayal in Tamil Nadu, in a rich family during the year 1784, and after performing divine service to Lord Muruga for many years, she died in the year 1854, at the age of 70. It is believed that, after her death, she reached the abode of Lord Muruga, the Skanda Loka.

Even though, she was an uneducated woman, due to the grace of Lord Muruga, she was known to read and write. At her young age, Sivakami Ammaiyar married to Kankamuthu, a noble person, and he was a farmer and both of them lived a peaceful and a happy life.

Her husband Muthu, was a sincere devotee of Lord Annamalaiyar of Thiruvannamalai, and both of them were interested in doing social services, and provided food and built huts for the poor people. Since they had no children, they treated all the children residing in their village as their own, and educated them properly. They eagerly served all the saints, and provided food and water to them.

Once, due to their good nature, Lord Murugan appeared in the dream of Sivakami Ammaiyar, and asked her to go to Vandadumpottal, along with her husband, in order to build him a temple on the hilltop. Sivakami Ammaiyar obeyed the orders of Lord Murugan, and she built the Thirumalaikoil temple by selling all of her property, as well as her husband’s property.

Thirumalaikoil is a holy shrine, which is dedicated to Lord Muruga, and he is known as Thirumalai Kumaraswamy, and the temple is situated at Panpozhil near Tenkasi in Tirunelveli district, Tamil Nadu. It was built by Thiruvarutchelvar Sivakami Ammaiyar. The temple is surrounded by paddy fields, and holy trees, and the town of Tenkasi is visible from the hilltop which provides a rich feast for the eyes of the visitors. Many films had been shot at this location.

Hence, let us once visit this beautiful temple of Lord Muruga, and be blessed.