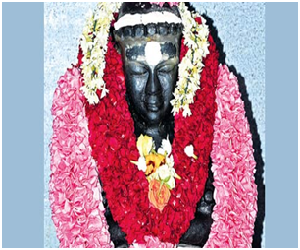 Somasi Mara Nayanar (8th Century AD) is a Nayanar saint, and was one among the 63 Nayanars. He was an ardent devotee of Lord Shiva and also a devotee of Sundarar. He attracted others through his simplicity, generosity and kindness.

Somasi Mara Nayanar belongs to Brahmin caste and served as a temple priest. He was born in a village in Nagapattinam district of Tamil Nadu.

He was a great devotee of Lord Shiva, and was very much interested in conducting pujas, soma-yajnas (sacrifices). Hence he was called as Somasi Mara Nayanar. He was against caste discrimination and served food to all the devotees of Lord shiva without seeing any difference with regard to their caste or community. During his period, he recited the Panchakshara mantra of Shiva for several lakhs of time. He went to Tiruvarur and met Sundarar. He became a disciple of Sundarar and served him in a proper manner. Due to his sincere service on Sundarar, he attained the grace of Lord Shiva.

Shiva transformed himself and his family in the form of outcaste persons and arrived to the place where yagna is performed. Nobody was aware of the true identity of the shiva family. But Lord Ganesa had given a clue to the nayanar that the family was none other than the shiva family. Then Shiva appeared with Parvati in his true form and blessed Somasi Mara Nayanar and accepted the offerings of the yagna.

He lived a saintly life by keeping the thoughts of Lord shiva in his mind. His entire body is attached with the devotion of Lord Shiva. He considers himself to be the slave of Lord Shiva, and done his daily activities by chanting shiva mantras and names. He lived a noble life, and performed temple pujas and conducted pujas in his home, and offered food to the shiva devotees and to the poor people. He lived a sin free life and finally attained salvation. He also helped the people of all castes to reach the spiritual path, and advised them to recite the shiva mantra “OM NAMAH SHIVAYA” in order to get relieved from their problems.

Let us worship the great divine nayanar and be blessed.