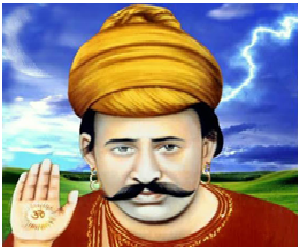 The great saint Sri Satram Das Sahib was born in a small village in Sindh Pakistan in the year 1866. He is a Sindhi Hindu, and considered as an ardent devotee of Mata Durga Devi.  He was a great man who gave all kinds of prosperities to the poor and the needy people. People from all classes would seek his blessings. Satramdas Sahib had done wonders in the lives of his sincere devotees.

Saint Sai Satramdas Sahib would show his affection to the poor girls and treat them as his own daughters and help them to get married by arranging funds from various places. Saint Satramdas Sahib asked the people to look the women as the forms of Ma Shakti, and to properly respect them. He has done lot of miracles during his lifetime to his devotees: He turned the poor into rich, unhealthy into healthy, bad ones into good ones, dull into clever.

Saint Satramdas Sahib was a great Saint, and he was considered as a saviour to the people. He was a famous singer and he sung several melodious songs in praise of the deities. Similar to other Sindhis, his Kuladeva is Sri Jhulelal Maharaj, an avatar of Lord Varuna Bhagavan.

Let us praise the noble saint and be blessed.