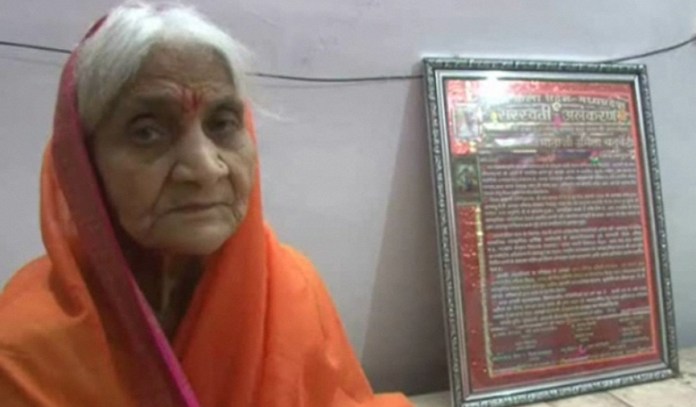 Urmila Chathurvedi is a senior citizen who crossed 80 years, and from the year 1992 onwards, Mataji Urmila, stopped eating food grains and used to eat only fruits and milk items, in order make her dream into reality, since she wanted the Ram Temple to be constructed at Ayodhya. Mataji lives in Jabalpur, Madhya Pradesh, and she is an ardent devotee of Lord Rama, from her childhood itself. Her mother used to tell the incidents from Ramayana, and the young child used to observe it keenly.

Mataji had visited several temples of Lord Rama, but she is very much worried for not having a Rama temple at the birth place of Lord Rama. She has observed fasting for more than 28 years, and finally her wishes are going to be fulfilled through the blessings of Lord Rama. Her family members gave their full support for her fasting, and she decides to end her fasting after taking the Temple Prasad at the Rama Temple of Ayodhya.  Since the construction of Rama Temple is going to take place in this month (August 2020), Urmila Chaturvedi is very happy and she is eagerly waiting for the opening of the Ram Temple at Ayodhya.  She also wants to offer her prayers at the banks of the Holy Sarayu River after a few months.

According to Mataji, Lord Rama is everything for her. She used to study the Ramayan book from her young age itself, and she is still continuing the practice of reading Ramayan book, chanting of Lord Rama’s names, and listening to the songs of Lord Rama. She is also a devotee of Lord Hanuman, and used to perform pujas to Lord Rama and Lord Hanuman at her house. At last, finally, her prayers are answered, and after some time, she will be happily visiting the Rama Temple at Ayodhya with full of pleasure in her mind, and can offer her humble salutations to Lord Rama.