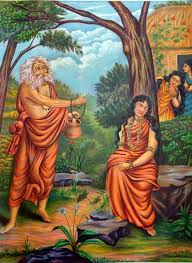 Durvasa is known as Lord Brahma’s Manasaputra. He was the son of Sage Atri and Anasuya. He was born to Atri after his hundred years of harsh penance. There are many legends associated with the birth of Durvasa.

Atri returned to his abode after his long penance and was blessed by the Trinity. He saw three babies lying in a cradle in his room. They were none other than Brahma-Vishnu-Mahesha (Shiva). Lord Brahma was born as Chandra, Lord Vishnu as Dattatreya and Lord Shiva as Durvasa. (Bhagavat Purana 4.1, Vishnu Purana 1.25 , Shivashataxari 19).

The literal meaning of Durvasa is the one who wears dirty clothes. It also means the one born after drinking the juice of Durva grass.

Durvasa in the Ramayana of Valmiki

In the Uttarkanda of the Ramayana, after Lord Rama abandoned Sita, the time had come for him to return to Vaikunta. After getting instruction from Lord Brahma, Kalapurusha arrived on earth as a messenger to tell Lord Rama about his upcoming departure from the earthly planet. As per protocol, when Kalapurusha would meet Lord Rama no one except the two of them should have been present in the meeting. If anybody else barged into the room he or she should face death on that very moment.

Hence, Lord Rama informed his brother Lakshmana to guard his chamber so that no one could enter inside. Coincidentally, Sage Durvasa appeared on the scene and he asked Lakshmana to let him enter the chamber since he would like to urgently meet Lord Rama. On his persistent request Lakshmana had to interrupt Rama and Kalapurusha. As per the promise given to Kalapurusha, Lord Rama had to renounce Lakshmana. Thus, Sage Durvasa circuitously helped Lakshmana ascend to Vaikunta. At Vaikunta, Lakshmana assumed his original form of that of Adhishesha and waited for Lord Vishnu (Rama) to arrive.

Durvasa in the Mahabharatha as a Ritwik

As per a legend, once King Swethaki wanted to perform a hundred year long Mahayaga and was in need of Brahmins who could play the role of ritwiks at the Mahayaga. When all the Brahmins turned down Swethaki’s offer, the king approached Lord Shiva. At this time, Shiva asked his divine spark, Sage Durvasa to fulfill the Mahayaga rituals by performing the role of a ritwik.

Once, Sage Durvasa decided to stay at the palace of King Kuntiboja for a year. During this time, Kuntiboja’s daughter Kunti served Sage Durvasa with great sincerity and devotion. Before returning to his place, Sage Durvasa blessed Kunti and also gave her a holy mantra from Atharvashirsha. Once Kunti wanted to test the power of the mantra and she asked for a ‘desired’ son from the Lord. To her astonishment, she was blessed with a powerful son who was later named Karna.

The story of Maharshi Mudgala has been described in many ancient scriptures. Maharshi Mudgala was a sage of limited means; he would go to the fields after the harvest to collect corn spilled on the pastures. He and his family survived on that. The Maharshi was extremely religious and once every 15 days i.e. on the full-moon and the new-moon day he religiously performed Ishtiyaga. During this Ishtiyaga, he fed hundreds of devotees whoever came to attain his yaga. Once, Sage Durvasa also personally attended the Ishtiyaga performed by Mudgala. Durvasa became extremely pleased with the hospitality of Mudgala and thus helped him attain salvation.

Durvasa in the Pandava Ashram

Being the divine reflection of Lord Shiva, Sage Durvasa was known for his unlimited rage, just as Lord Shiva’s ‘Tandava’. Once, Sage Durvasa and his hundred other counterparts arrived at the ashram of the Pandavas. Durvasa’s abrupt visit at the ashram put Draupadi into utter confusion as her family had just finished off with their daily meal and Akshaya Patra (the pot with unlimited food) would provide the next round of meal not until the next morning. At this crucial moment, Draupadi prayed to her Lord and brother Krishna who arrived at the Pandava ashram to rescue his sister. Lord Krishna checked the Akshaya Patra and ate one grain of rice stuck to the vessel. He then left the ashram and to the astonishment of all when Sage Durvasa and his counterparts arrived at the ashram, after bathing at the nearby lake, there stomach were so full that they were not willing to eat or drink anything. Sage Durvasa thus left the ashram after blessing the Pandavas for their success in the upcoming endeavors.

The most popular legend of Sage Durvasa has been mentioned in Srimad Bhagavatha. As mentioned in the text, it was Durvasa who cursed Ambareesha, the curse from which Ambareesha benefited tremendously as it brought the best in him and he became the greatest devotee of Lord Hari (Vishnu).

As per the legend, Ambareesha, the son of Nabhaga of the Manu clan, was one of the greatest emperor of his times who ruled the seven great islands. Lord Hari had bestowed his blessings upon him and gifted him the Sudarshana Chakra.

Once Ambareesha organized Ekadashi Vrita event at his palace. He himself observed the fast with great devotion for a year in order to seek blessings of Lord Vishnu. During this time, Sage Durvasa appeared on the scene as King Ambareesha’s guest at his palace. On the King’s request, Durvasa agreed to have food at the palace. As per the ritual he went to River Yamuna to take a holy bath and chant hymns in praise of the Lord.

According to tradition, the king had to eat before the auspicious time. By the time Durvasa came to his palace half the time was over. There was no possibility of Durvasa returning after finishing bath and his other rituals before the auspicious time was over. King Ambareesha was in a fix. He consulted Brahmins who were well-versed in shastras. It was a sin to eat before feeding a guest, a person who was a Brahmin. On the advice of experts in shastras, the king just had a glass of water and began to wait for Durvasa, all the while meditating on Lord Vishnu.

When Durvasa returned after completing all the rituals, the king made obeisance to him. By then the sage came to know that the king had broken his fast by drinking water. He was furious and his body began to tremble with rage. His eyebrows became raised. He was very hungry. He spoke harshly to the king who was standing before him with folded hands.

Durvasa then pulled out a hair and created a terrible demon out of it. The demon had a sword in its hand and even when it rushed at Ambareesha, he stood firm and cool. The Sudarshan Chakra granted by Lord Vishnu reduced the demon to ashes. When he failed in his attempt, Durvasa became nervous and when he saw the Sudarshan Chakra rushing towards him, he got frightened and began to run to save his life.

The power of Sudarshan Chakra

The Sudarshan disc began to chase Durvasa as a forest fire would chase a terrible snake. He ran for his life seeking refuge in Mt. Meru, the sky, in all secret places on the earth, the nether world, oceans and even heaven. It did not allow him to rest anywhere.

Durvasa took one year trying escape from Sudarshan Chakra seeking refuge in different places and finally returning to the king. All the while Ambareesha did not eat anything. He waited for the sage to come back. At the end of this episode, he touched the sage’s feet and begged him to become cool and then made him eat. He gave him a sumptuous feast and when the sage finished his meal, the king broke his fast only when the sage gave his consent.

As narrated in the ninth canto of the first part of Visnupurana, once while Durvasa was travelling round the world he saw a garland of flowers in the hand of a maiden called Vidyadhari. It was made of flowers from Kalpavriksha. The garland was fragrant. Durvasa desired to have it and asked the maiden to give it to him. Vidyadhari made oblations to the sage and gave the garland to him. Durvasa tied it to his matted hair and left the place.

As related in the first chapter of Madhurya canto of Gargya Samhita, Sri Krishna helped gopis to get a darshan of Sage Durvasa. The text also divulges an important link between Durvasa and Durva grass.

In Skandapurana there is a reference in its Kashikhanda, where it says that Durvasa spent years in the holy place of Kashi, performing tapas and got enlightened.

Most people have the notion that Durvasa always gets angry for silly reasons and curses people. One should not forget that many a time a curse by him brings about the welfare of the people. It has not even an atom of selfish motive.

Sage Durvasa is known as angry and ferocious.

It is true that Sage Durvasa used to deal with people harshly. He did it only to test the person and turn him out to be pure as gold.