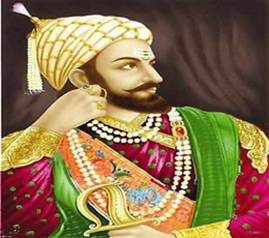 Chatrapati Shivaji, was a famous Maratha King and he was a great warrior. He fought bravely and defeated many Muslim Kings. He followed ancient Hindu traditions, respected Hindu beliefs and sentiments, and encouraged the Hindu scholars and Pundits and rewarded them with sufficient wealth.

Shivaji was a great devotee of Bhavani Mata of Tuljapur, and he used to visit the temple regularly. Shivaji was grown under the protection of his mother Jijabai, and she used to tell brave stories to him during his childhood itself, and due to that, he was grown as a brave warrior, and he had learnt the art of handling various weapons at his young age itself.

He also took proper care of learned scholars and saints and provided all sorts of facilities to them. After knowing about the significance of Bhakta Thukaram, a great devotee of Lord Panduranga, he invited him to his palace, and highly respected him. He considered females as incarnations of Ma Shakti Devi, and treated them nicely. Due to his good qualities, after his death, even the Mughal kings like Aurangazeb had praised about his valour, and also asked Lord Allah to give him a permanent place in the heaven. Though he had died before few hundred years, still now he is remembered by the people, and he is praised for his excellent qualities, and for his courage, knowledge, boldness and willpower.

Some of the best quotes of Chatrapati Shivaji Maharaj are as follows:-

When your mind and body is strong, then you can even lift a big mountain on your hands.

Everyone has the right to fight to protect their own nation from the enemies.

Learn a lot even when you are young.

Always raise your head up, and walk bravely like a lion.

Treat all the women with great respect and consider them as your own mother, sister and daughter.

Our own courage and willpower would do a lot, better than that of a sword.

Don’t get afraid of your enemies and fought bravely with them.

We have to be tolerant in our lives similar to the trees, which suffers a lot due to various changes in the climatic conditions.

Before doing a particular task, if you sincerely worship Bhavani Ma, then you would get sure success in your tasks.

All the religions teach only good things to us, and hence let us consider all other religious people as our brothers and sisters.

We should always give our timely help to those who are in need of it.

Always honour and worship the Holy saints and consider them as the divine messengers of the god, and for the people who are blessed by the holy saints, no task is impossible for them.

A coin has both sides likewise people are also classified as good and the bad. We should always interact with the good ones and must ignore the bad ones in our lives.

Life is short and hence before our death, we must have to achieve a lot.

God blesses the kind hearted people, and he would give all sorts of prosperity in their lives.

We must know in detail about our country, and we have to highly value our age old traditions and customs and must follow it in practice.

Education is a must for a person in order to properly survive in his life.

Whenever if you come across a roaring lion, don’t get afraid of it, instead of that, develop more and more courage on your mind, worship Ma Bhavani, and try to fight with it bravely.