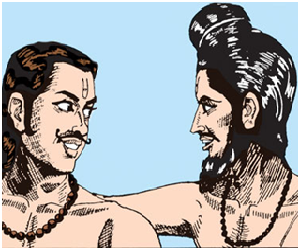 Drupada was the father of Draupadi, and he was a noble person, as mentioned in Mahabharata. He was the king of Panchala, and he was the son of King Prishata.

Drupada and Drona studied together under the                        holiness Sri Bhardwaja Maharishi, who was the father of Drona. They become close friends and Drupada promised Drona that after he becomes a king, he would give half share of his kingdom to Drona.

But after a few years, when Drona met Drupada and asked him to give his share in the Panchala Kingdom, Drupada pretended as if he doesn’t know him, and asked him to get out from his palace. Drona after becoming the guru for the Pandavas and the Kauravas had asked Arjuna to attack the Panchala Kingdom, and to bring Drupada before him.  As per the wishes of his Guru, Arjuna defeated Drupada and gave half of the kingdom as share to Drona.

After several years, Draupadi was married with Arjuna and Dhrishtadyumna had killed Drona in the Kurukshetra war.  In the Kurukshetra war, Drupada fought along with the Pandavas and killed several kaurava warriors in the battle field. He was praised by Bhishma as an excellent warrior. Though Drupada had shown enmity on Drona, in general, he was a nice person, and ruled the panchala kingdom in a proper manner.

He was a devotee of Lord Krishna, and he worshipped him wholeheartedly. Through his good karmas, he was blessed to have the avatars of Mata Shakti Devi and Agni Bhagavan as his children. After his death, due to the grace of Lord Krishna, he went to the abode of Lord Indra, the swarka loka, and he still enjoys all sorts of comforts and luxuries in that divine loka.