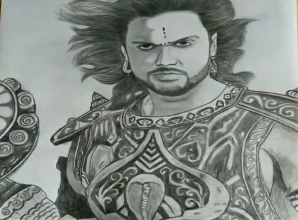 King Ayu was the forefather of the Hastinapur King Shantanu. His parents were  Pururavas  and the celestial dancer Urvashi. He had married with Prabha, who was the daughter of the great demon king Swarbhanu. His son was  Nahusha , and the consort of Nahusha was Ashoka Sundari, the daughter of the divine couple, Shiva and Parvati.

He has obtained various magical powers from his mother Urvashi, and he also visited the Indra Loka through his human body, and he fought on the side of the Devas during their war with the Demons. He has talented in handling powerful deadly weapons from his Guru, and he has mastered in all the Vedas, Shastras and Idhihasas. He has received various boons from Lord Indra, and also received various powerful weapons from him. He had given great respect to the sages, demi gods, gods and goddesses, and through their blessings, he had lived a healthy, wealthy and a blessed life. He used to travel to various divine worlds, and once he met the great Vishnu devotee, Bhakta Prahalada in the Sutala Loka, and received blessings from him.

There is an ancient Proverb, which the people who lived in the kingdom of Ayu used to frequently tell, “Oh during the rule of our great king Ayu, rain is showered properly and crops are properly growing, and no one has suffered from poverty, we are all considering him as a god, and we would always honor him properly”. Ayu was mentioned in the Puranas, and in the Ramayana and Mahabharata. He was considered as a brave king, who had ruled his kingdom in an excellent manner. After successfully ruling his kingdom for a long period, at his old age, he went to the Himalayas along with his consort, performed penance on Lord Shiva, and attained salvation. After his death, his son Nahusha ruled over the kingdom in a well- versed manner.