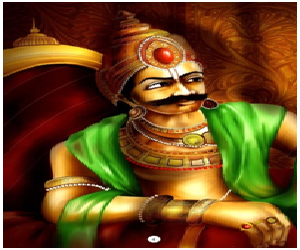 As per the request of the Devas, once he fought with the demons, and defeated them. Due to that, Lord Indra become very happy with him, and offered various boons to him. There was an ancient song dedicated to him, “During the rule of our king Bhumanyu, we have not faced any difficulty in living our life. All of us have happily lived for many years, without any suffering from diseases and poverty. During his rule, rain was showered on all the seasons, and food crops were grown properly. People lived a long life, with full of happiness in their mind. Our king, Bhumanyu had treated all the people as alike, and he highly respected the holy sages like Upamanyu”.

After successfully ruling his kingdom for many years, as per the advice of Rishi Narada, he went to the holy Mountain Himalayas, performed meditation on Lord Vishnu and attained salvation.

Ancient kings are considered as divine AMSHAS of Lord Shiva and Vishnu, and they highly respected their own people, and showed much importance for the welfare of their kingdom. They also severely punished the criminals, in order to maintain proper law and order in their kingdom. Most of the kings have reached the abode of Lord Indra, the swarka loka after their death. Though they have died, their name and fame would never diminish in this world, and from our holy texts, we can know more about our ancient kings.