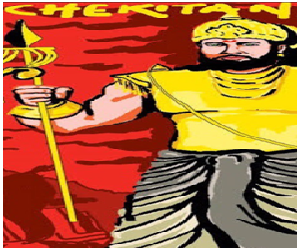 Chekitana was born in the Suryavanshi clan and he was the son of Dhrishtaketu, the king of Kekaya Kingdom, and his family were close to Pandavas. His brother was Shaibva and his sister was Karenumati who married with Nakula. He also participated in the Mahabharata War, and died in the hands of Duryodana. Chekitana played a minor role in the great epic Mahabharata, and he was very much liked by Lord Krishna, due to his good nature, and soft approach.

Chekitana was a righteous person, and he was a relative to the Pandavas. He arranged the army men for the Pandavas before the start of the Kurukshetra war. He also bravely fought with the son and the grandson of the great king Bahlika, who was the brother of Shantanu. Chekitana served as an army chief for a part of the Pandava’s army. Chekitana killed many Kaurava warriors and proved his archery skills. During the war, Chekitana  saved Nakula from the clutches of Duryodhana, and he also fought bravely with Drona and Kripa.

Most of the warriors, who fought in the Kurukshetra war, were attained salvation since they have met a heroic death. They have fought bravely for the welfare of their masters, and they didn’t care about themselves during the time of the war. Ancient warriors were properly treated by the kings, and they would be provided with all the household necessities to comfortably run their family. Even after the death of the warriors, most of the kings would provide sufficient provisions and other necessities to their family permanently.