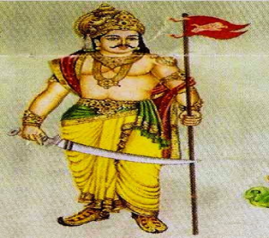 The great Chera king, Senguttuvan ruled his kingdom during the 2nd century AD, and he was a popular king during the ancient period. He was the son of the great king Cheralathan.

Under his reign, his kingdom was expanded till Kerala, and through his great valour, the kings in his nearby kingdom were given proper respect to him, and moved with him in a friendly manner. He ruled his empire for more than 50 years, and he also ruled the present day Coimbatore.

Once Senguttuvan’s wife Illango Venmal came to know about the story of Ma Kannagi, and considering her holiness, she wanted to build a temple for her in order to worship her as the goddess of chastity. Senguttuvan had accepted the proposal of his wife, and he had built a nice temple for Ma Kannagi at his Kingdom. He also considered Ma Kannagi as his Kula Devi and worshipped her whole heartedly along with his wife. Apart from building Ma Kannagi Temple, Senguttuvan also constructed many small and big temples for Lord Shiva.

His brother was the famous Ilanko Adigal who had become a Jain monk, and he was the author of Silappatikaram.

His achievements were mentioned in the ancient Tamil literature Silappatikaram. Senguttuvan had established business even in foreign countries, and he made his trading activity through ships.

Kuttuvan cannot be defeated by anyone, since he was blessed by Ma Shakti Devi.

Kuttuvan looks very handsome, used to wear golden ornaments, had won many kingdoms, and he ruled a big kingdom in an efficient manner.

Kuttuvan was praised by everyone in this world, and his name and fame was spread throughout the world.

Kuttuvan was the noble king who had established many food and resting shelters throughout his kingdom, in order to remove the hunger of the tired travellers.

During his period, people didn’t suffer from natural calamity like earth quake, storm and Tsunami.