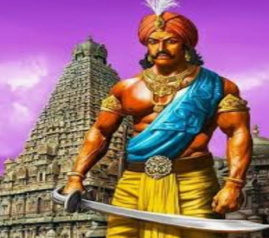 Kumanan was an ancient king who ruled the present day Temple Town Palani, which is situated in Tamil Nadu, and he was mentioned in the Sangam Literature. He also built a nice Shiva Temple in Palani, and installed a holy Shiva Lingam in the Temple. He was a great philanthropist, and his name and fame was spread across Tamil Nadu.   He was praised by the poet Perunchithiranar for his good qualities.

Once Kumanan was defeated in a battle and he was hiding in a forest. His enemies were searched for him, and they announced good prize money for those who carry the head of Kumanan. When the great poet Perunchithiranar was travelling in the forest, he met Kumanan, and asked him for some money. Immediately Kumanan had gave his sword to the poet, and asked him to chop off his head, in order to receive the huge prize money from his enemies. The poet took the sword, met the enemy king and explained about the greatness of King Kumanan.

During the rule of Kumanan, the people who lived in his kingdom were lived with peace of mind, and no one has suffered from poverty and diseases. All of them happily lived for many years, and they considered their King Kumanan as equivalent to god. King Kumanan though had lived a luxurious life, but he took care of his people in a proper manner.

Some of the contents contained in the songs on King Kumanan penned by the great poet Perunchithiranar are as follows:-

Oh the great King Kumanan, you look very handsome, and all of your consorts are serving you in a pleasing manner. Through your golden rule, people in your kingdom are happily living without any difficulties.

You are gifting the required things to the people, and you are also properly taking care of them.

You are even providing food grains to the birds, and also providing sufficient food to the animals.

You have been surrounded with wise ministers, and as per their advices, you are discharging your duties in an excellent manner.

You act as a parent to your people and you are showing your great love and affection on them.

Even the divine devas in the heaven are praising your wonderful nature, and they are also blessing you.