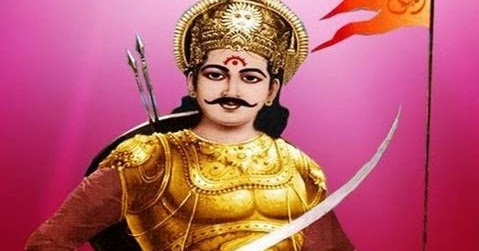 INTRODUCTION
Mandhata was an Ikshvaku  king and the son of Yuvanashva. He got married with Bindumati, daughter of Yadava king Shashabindu. And he had three sons, and he is well known for his charitable activities, and he had maintained strict law and order in his kingdom. He was mentioned in Rig Veda and Mahabharata.
King Yuvanashva of Ayodhya once while hunting in the forest, felt thirst and drank sacred water which was kept by a sage for his wife, without knowing about its reaction. Hence he had become pregnant, and soon he delivered a beautiful baby boy, and he was given divine nectar by Lord Indra itself, and the boy was known as the great king Mandata.
Mandata contain good knowledge in Vedas and obtained divine knowledge from Guru Brahaspati. He was good at archery, and considered as a great warrior king.
Due to his great powers, he has become the king of the entire earth. He ruled his kingdom in a good manner, and all the people in his region were happily lived and praised for his kindness and goodness.
He made lot of fire sacrifices and pleased the divine gods. He was a great devotee of Shiva-Sakti. Once he defeated Ravana in the battle.
During a battle with the great warrior Lavana, he was killed.
Let us worship the great king Mandata and be blessed.
“OM SRI MANDATA MAHARAJAVE NAMAHA”
“JAI SRIRAM”
“JAI MATA SITA”
WRITTEN BY
R.HARISHANKAR