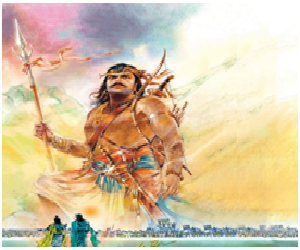 King Muchukuntar ruled the ancient Tamil Nadu before few lakhs of years. He was an ardent devotee of Lord Muruga, and pleased by his devotion, Lord Muruga arranged marriage for him with his army chief Veerabahu’s daughter, thus by making him as an immortal. His name was mentioned in ancient Tamil Divine Texts, and his love and bhakti on Muruga cannot be explained in words. He worshipped Lord Muruga in the Pothigai Hills, and got great boons from him. He also met Rishi Agastiya in the Pothigai Hills and sought blessings from him.

He ruled his kingdom in a prosperous manner, and treated his people as alike. No one in his kingdom had suffered from poverty, diseases and mental worries. All other kings maintained friendship with him, and gave valuable gifts as a token of expressing their love with him. He is also a sincere devotee of Lord Shiva, and he worshipped him in the form of Veerabhadra. He helped Lord Indra during his war with the demons, and thus maintained friendship with him. He lived a long life and ruled his kingdom for several thousands of years. At the final stages of his life, he had performed severe penance on Lord Muruga along with his consort, and went to the abode of Lord Muruga, the Skanda Loka. It is believed that he still resides in that Loka, by praising the greatness of Lord Muruga.

Similar to Vaikunta and Kailasa, there is a marvellous divine world present in the upper worlds, known as Skanda Loka. Lord Muruga resides permanently in that Loka, along with his consorts, divine attendants and with the popular sages and saints like Agastiya and Arunagirinathar. Though it is very difficult for us to reach the holy abode of Muruga, at least we can dream about it and by the way we can enjoy the spiritual bliss. Hence let us worship the lotus feet of Lord Muruga and be blessed.