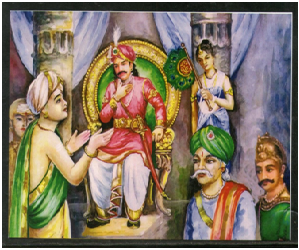 Pratipa was the king of Hastinapur and he ruled it during the previous dwapara yuga. He was mentioned in the Mahabharata, and he was the father of Shantanu and his grandson is Bhishma. His parents were king Bhimasena and queen Sukumari. He was married to Sunanda and his sons were Shantanu, Devapi and Bahlika. He was a very generous king, and he used to donate gold coins to the poets and Brahmin scholars at his court.

Once when King Pratipa was worshipping the Holy River Ganges, Ganga appeared before him in the form of a beautiful lady, and blessed him to have a pious son, and also agreed to become his daughter-in-law, by marrying his son Shantanu. In course of time, Shantanu was born, and he later married Ganga and they had Bhishma as their lovely son.

The Hastinapur King Pratipa is praised for his valour and he also helped Lord Indra during his battle with the demons. Even during the war, he was not interested in killing the demons, and hence, he caused only minor injuries in their body and made them to flee from the battle field. He is such a kind of holy person!

Due to his good karmic deeds done in his previous birth, he had holy sons such as Shantanu, Devapi and Bahlika. His son Bahlika is believed to be the incarnation of Bhakta Prahalada, and he lived his life in a righteousness manner. During the time of Pratipa’s rule, the rain was showered in all the seasons, and the crops were also harvested properly. His people didn’t suffered from poverty, and all of them lead a happy and a peaceful life. He performed fire sacrifices and pleased the divine devas in the heaven.

After living a noble life for many years, he crowned his son Shantanu as the king for his kingdom, left to the forest, performed severe penance on Lord Vishnu, and attained salvation. According to legend, whoever listens or reads the story of the great King Pratipa, would be blessed by the divine devas from the heaven, and they would get all kinds of prosperity in their life.