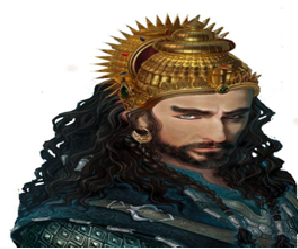 As per the holy Bhagavata Purana, Satrajit was born in the previous Dwapara Yuga, and he was a Yadava king. His daughter was Satyabama, an incarnation of Ma Bhudevi, and she married to Lord Krishna. He was an ardent devotee of Lord Surya Bhagavan, and in appreciation to his Bhakti, Lord Surya granted the Syamantaka Gem to him. Syamantaka Gem was a very precious gem, and those who keeps it in their puja room and worships it regularly would get all kinds of prosperity in                   their life, and they would not suffer from sickness and from any other kind of sufferings in their life.

Satrajit met Lord Krishna and showed the Gem to him. Lord Krishna asked Satrajit to give the Gem for a short period to King Ugrasena in order to bring fortunes in his life. Satrajit hesitated in giving the Gem to Ugrasena, and went back to his kingdom.

Once, Satrajit’s brother, Prasena, wore the jewel on his neck and went into a dense forest for the purpose of hunting the animals. But while he was on hunting, he was killed by a lion and it took the gem with it, and went inside a cave. The cave was belonged to the mighty bear king Jambavan. Jambavan killed the lion and took the gem, and gave it as a play thing to his young child Sukumaran. Satrajit thought, that Lord Krishna would have killed his brother for want of Syamantaka Gem, and insulted him.

In order to prove himself as an innocent person, Lord Krishna searched in the forest, and there he found the dead body of Prasena, brother of Satrajit. While searching for the Syamantaka Gem, Lord Krishna found a big cave, and went inside it. When Krishna asked Jambavan to return the Gem, he refused and fought with Krishna for 28 days. Finally he realized that Krishna was none other than his beloved Rama, and tears began to flow from his eyes, and asked apology to Krishna for his mistake and as per his wish, Lord Krishna married to Jambavati, daughter of Jambavan. Krishna received the gem from Jambavan and gave it to Satrajit. Satrajit was very much displeased by his own act, and as a reward, he asked Lord Krishna to marry his daughter Satyabama. Krishna had agreed for that, and he married Satyabama.

As per the evil advice given by Kritavarma and Akrura, the Yadava warrior Satadhanwa killed Satrajit during his sleep and possessed the gem. Later Lord Balarama killed Satadhanwa.

Since Satrajit was blessed by Lord Krishna, after his death, he reached heaven.

As per Bhagavata Purana, those who read the details about Satrajit and the Syamantaka Gem would be blessed by Lord Surya Bhagavan, and they would prosper in their life.