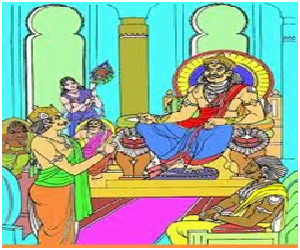 Vajradatta was the son of the great king Bhagadatta, and he ruled the Pragjyotisha Kingdom in a righteousness manner. Vajradatta had learnt the Vedas and other divine subjects from Brihaspati, the divine Guru.  Vajradatta is powerful similar to Indra, and he has done lot of yagnas and pleased the Vedic deities.

He was mentioned in the Mahabharata and during the time of the Kurukshetra war, he was unable to participate in the war along with his father Bhagadatta since he was a small child. But he kept the sacred Ashwameda horse with him, when Arjuna came to his kingdom in search of the horse. After fighting with Arjuna for several days, however he was defeated by Arjuna, and returned the horse to him, and also he became a friend to Arjuna.

Vajradatta is mentioned in various holy texts, and he is described as a great warrior, and he is a man of great humility. Vajradatta also helped the demi gods when they faced defeats in their battles with the demons. He also considered as a close friend of Lord Indra also, and during his period, similar to Arjuna, he also went to the Indra Loka, with his physical body.

Ancient kings were considered as brave warriors, who would never get fear for anything in their life. They have lived their lives, according to the proverb, “DO OR DIE”. Attaining heroic death is the main aim for them, and most of them have attained heroic death in the battle field, and the remaining kings used to meditate on the almighty after attaining old age. Usually they would keep learned Gurus and clever ministers with them, and through their help, they have ruled their kingdom in a well-versed manner.

People used to consider their kings similar to the gods, and would pay great respect to them. No one would raise voice against their kings, and the kings also treat their people as their own children and would provide all sorts of facilities to them.