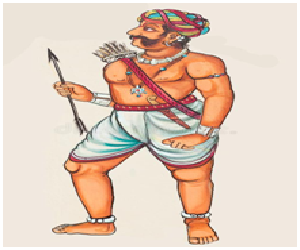 Nambirajan was the foster father of Ma Valli, who is the consort of Lord Muruga.

Before several lakhs of years, Nambirajan, a Tribal leader ruled a hilly region in South India, and he was considered as a staunch devotee of Lord Murugan. Since he didn’t have a child, he and his pious consort began to worship Lord Muruga for several years. One day their prayers were answered! Nambirajan saw a beautiful child in bushes, and he immediately picked up the child, and brought it to his home. He and his wife were very happy, and brought up the child in a proper manner.

Similar to her parents, Valli also become an ardent devotee of Lord Muruga, she loved him very much, and decided to marry him. Once, as per the instructions of her father, Valli looked after the farm field, in order to protect it from pests. Due to her selfless and sincere devotion, Lord Muruga was very much pleased with her, and met her in the form of a young hunter, and began to ask strange questions to her. Valli didn’t recognise the Lord, and asked him to leave the place. On seeing the father of Valli arriving at the field, Murugan has transformed himself into a tree, and subsequently again he has transformed himself as an old man. Murugan in the form of an old man had his food and drank water given by Valli, and asked her to marry him. On hearing his words, Valli had become angry with him and decided to leave the place. Lord Vinayaka in order to help his loving brother Muruga, had appeared in the form of a wild elephant and stood in front of Valli by raising his trunk. Valli become very much scared and sought the help of the old man. Immediately Lord Muruga had revealed his true form, and promised her to marry.

The place where Valli and Muruga had got married is presently situated in Vellore District of Tamil Nadu. After their wedding, Murugan and Valli, went to Thiruthani, which is considered as one of the six main temples of Lord Murugan, and then they moved to the Skanda Loka, a divine world located in the upper worlds.

Nambirajan due to his bhakti and sincerity on Lord Muruga, after his death, reached the abode of Lord Muruga along with his wife, and it is believed that, he is still living there and worshipping Lord Muruga.