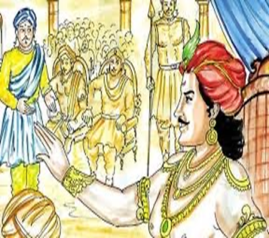 In the Sangam Literature, the details about seven popular kings was mentioned, and they were great philanthropists. Though all of them were small rulers, but their name and fame is still praised by the people of Tamil Nadu. The details about them are as follows:

Began – He is a noble ruler, who had once seen a peacock which is shivering in the cold climate at a forest, and after seeing the pitiable position of the peacock, he had taken a golden blanket from his bag, and covered the blanket on the body of the peacock.

Pari – He is a great ruler, and once while he was riding a chariot, the branch of a holy plant was struck in his chariot, and due to that, he has offered his chariot for the sake of the plant.

Kari – He is also a ruler of small kingdom, but through his soft speech, he used to convince even his enemies. He had donated lot of wealth for the sake of the poor people, and made them into rich.

Aai – He is a good ruler for a small kingdom, and once he got a precious stone which was vomited by a blue coloured divine snake. He offered that valuable stone to Lord Kutralanathar.

Adiyaman – He is a kind hearted and a generous king, who once gave a gooseberry fruit to the Tamil poet Ma Avvaiyar, in order to increase her life period.

Ori – He is a nice king, who had gifted his entire country to the musicians who used to play the great music instrument Yazh. During his rule, he defeated his enemies, and he appeared like a roaring lion to them.