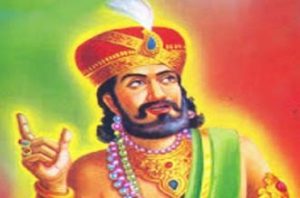 INTRODUCTION
Vidura is one of the chief personalities in the Mahabharata, and he was the prime minister of the Kuru dynasty, and likewise the uncle of Pandavas and Kauravas.
IMPORTANCE
Vidura was the son of sage Vyasa. Vidura was an adviser to the Pandavas and safeguarded them from death on several occasions, which was plotted by Duryodhana.Vidura protested against the insult caused to Draupadi in the Kaurava court. Vidurasided with dharma and the Pandavas during the Kurukshetra war.

According to Krishna, Vidura was considered as an avatar of Lord Yama Dharma. Krishna respected Vidura’s knowledge and for his devotion to towards the welfare of the people.

When Krishna visited Hastinapura as a peace messenger of the Pandavas, he stayed at the home of Vidura, since Krishna knew Vidura will properly look after him in his palace.

In demonstration facing the Kurukshetra War, Vidura quit from the post of minister.

Vidura in his old age went to the forests as a saint with his half-brother Dhritarashtra and his sisters-in-law Gandhari and Kunti. Before his death, he gave his power to Yudhishtra, saying that both of them were the incarnations of Lord Yama Dharmaraj.

Let us pray to the great Vidura, and seek his blessings, and live happily and peacefully forever.
“OM SREE VIDURAYA NAMAHA”
WRITTEN BY
R.HARISHANKAR