Guru Arjan Dev was born on May 2nd 1563. He was the fifth of Guru of Sikhs, in line, and acquired his position on 16th September 1581. He was appointed by his immediate predecessor and his father, Guru Ram Das. Guru Arjan’s mother, Bibi Bhani, was the daughter of the third Sikh guru, Guru Amar Das.

Born in the small village of Goindval in Punjab, Guru Arjan Dev was the youngest of three sons of Guru Ram Das and Bibi Bhani. Since childhood, Guru Arjan Dev exhibited many virtuous qualities, including devotion, selflessness, and egalitarianism. His life unfolded many challenging events which resulted in his martyrdom for the benefit of his people and society.

Of the three sons of Guru Amar Das, the eldest, Prithi Chand, was quite judicious in managing social affairs including  ‘Guru ka langar’ (community kitchen). On the other hand, the second son, Mahadeve, led an ascetic life and never accepted the Guruship tradition.

On June 19th 1589, Guru Arjan Dev got married to Mata Ganga, the daughter of Bhai Krishna of Mau village, near Phillaur Punjab.

The well known town of Bilga (older name Doaba) is where Guru Arjan Dev stayed for some time before departing for marriage. The place is believed sacred and its people are protected with the blessings of the guru. After taking holy bath and before proceeding for the marriage, the guru left behind his personal items like Chola, Pyjama, Batva, Dushala, Simrana Mala, Saili (cap), and Chandan ki chawanki. In the present day, Gurudwara Bilga Sahib is visited by all Sikhs in memory of their fifth guru’s visit to the village.

A three day carnival is celebrated every year at Bilga to mark the marriage occasion of Guru Arjan Dev and Mata Ganga ji. On the last day, the clothes and accessories of the guru are exhibited for the view of the general public at Diwan.

Completion of the Harmandar Sahib

The foundation of the Sikh religion, as laid by Guru Nanak Dev, was further reinforced and strengthened by his successors. Similarly, Guru Arjan Dev also dedicated his life for putting Sikhism on a solid footing. Guru Arjan Dev firmly stood by his decision on completion of the holy place where his father, Guru Ram Das, had founded a clay tank of Nectar. He was a staunch follower of Sikh philosophy which maintains that ‘Neither I am Hindu, Nor Muslim…’

With all good intention, Guru Arjan Dev also invited the then famous Muslim saint, Mian Mir, to lay the foundation of the Harmandar (Golden Temple). The four doors of this temple symbolically invite people of the four castes and all religions to the holy shrine. The lowered floor area of the Harmandar Saheb signifies that just like the flow of water, the devotees seeking their Guru’s blessings must let down themselves upon entering the shrine. Today, the Harmandar (Golden Temple) sanctifies the whole city of Amritsar and is one of the major religious places of India and the world.

Completion of the Adi Granth

The compilation of the Sikh holy book Guru Granth Sahib is the most significant achievement and contribution of the fifth Sikh guru, Guru Arjan Dev. He amended the sacred Hymns and teachings of the first four Sikh Gurus, which were altered and distorted by many imposters. He skillfully preserved the invaluable scripture of the Sikh religion for imparting the spiritual knowledge to the future mankind.

With dedicated efforts, he helped establish a separate identity for Sikhism, which is independent of other castes and religions in the society. He brought tolerance amongst his people so that they can respect secularism and maintain universal brotherhood. He added his own compositions to the list of earlier Hymns of his Gurus. Also, he added the ethereal symphonies and masterpieces from composers of different times, castes, beliefs, sects and religions. They are Sheikh Farid and Bhagat Kabir Dhanna Namdev, Trilochan, Pipa, Beni, Ramannand, Bhagat Ravi Das, Jai Dev, and Surdas.

Guru Arjan Dev was also an inspiring poet and over 50 percent of the Guru Granth Sahib comprises his own sacred versions and divine revelations. The holy text also reflects on the contemporary social and political life; and sifts wonderfully one’s spiritual awareness from his gross physical being. Guru Arjan is also revered for establishing new settlements at Kartarpur, Tarn Taran (with Tank of Salvation), and promoting the Baolii construction at Lahore.

Enormous popularity of the Sikh Gurus

Guru Arjan Dev gave enormous thrust to the House of Baba Nanak. Those were the times of highest socio-political and religious upheavals in India. Muslim invasions had led to many barbarous crimes and people of India – both Muslims and Hindus – were desperately seeking some kind of spiritual recourse.

People of all castes and creed attended Guru’s satsangs at Harmandar Sahib for inner tranquility. They abolished the Orthodox Muslim rule in India and thousands of devotees became Guru’s Sikhs during Guru Arjan’s time as the fifth Sikh Guru (amid 1581-1606). Many social and political leaders also became the adherents of Guru Arjan Dev, such as Chaudhary Amrika of Tarn Taran Sahib region, Bhai Manjh of Kang Mai village, Chaudhary Langaha Dhillon of Jhabal  besides many others.

Many Punjabi tribes, including Hindu and Muslim tribes, such as Tarkhan, Kamboja, Saini, Jatt, Khatri, Rajput, Arora, and Chamar also converted to Sikhism during the time of Guru Arjan Dev. Sikhism became the prominent religion of medieval Punjab and equal number of Muslim Pirs and Hindu yogis joined the Guru and adopted his religious philosophy.

Guru Arjan Dev gained immense popularity amongst the people of all religions as his message on humanity and way of life was very crisp, pure and comprehensible. The Guru was also revered for addressing the impending grass root level issues of the society. He established many villages and towns, constructed many wells in and around the Punjab region. Gradually many regions of Punjab like Nakka, Doaba, Malva and Majha fully adopted Sikhism. Thus Sikhism, under the aegis of Guru Arjan Dev, played a great role in bringing peace in the society during the 16th Century; perturbing Mughals of Delhi to quite an extent.

The fourth part of the Bani was included by Guru Arjan Dev when he reunited with his father.

My mind longs for the Blessed Vision of the Guru’s Darshan.

My thirst is not quenched, and I can find no peace,

without the Blessed Vision of the Beloved Saint. (1)

Another Bani with the similar name was also composed later by the tenth Sikh master, Guru Gobind Singh. The full name of Guru Gobind Sing’s Bani, present in the Dasam Granth, is Shabad Hazare Patshahi 10.

Guru Arjan Dev was the first Sikh martyr who was killed by Muslim fundamentalists of the 17th Century. It is said that the Muslims were unhappy about a passage of the Sikh scripture which referred to Islam. When Guru Arjan Dev resisted any change, he was relentlessly tortured to meet his death. He finally left his body after five days of unendurable pain and suffering. 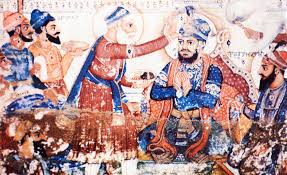