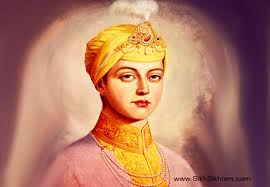 The earlier Guru Har Rai chose his younger son Har Krishan in favour of his elder son Ram Rai and it is said that he was only five years old at that time. His elder son Ram Rai had been excommunicated by the Guru and it is said that the new Guru though tender in years had achieved the spiritual stature of great devotees like Prahalad and Dhruva. At the time of his succession, the clouds of bigotry and persecution were thickening. Aurangzeb was the King and he was intolerant towards non Muslims. Also Ram Rai who was disowned and disinherited by his father began to influence the Sikhs about his rightful possession of the Guruship. The earlier Guru had been unable to attend to the organisation and spiritual affairs of the Sikhs Sangats or centres outside Punjab. Hence their interest in Sikh affairs could not be stepped up. Certain Masands or heads of these Sangats also began misusing their powers for their own ends. Though he had tried to arrest the downward trend of the Sikhs in terms of expansion, organisation and intensity of faith because of lack of time at his disposal he could not respond adequately to the challenges which came about due to circumstances.

Guru Har Krishan was born on July 7th 1656 at Kiratpur. He was the younger son of Guru Har Rai and Mata Sulakhni. As he was just five years when he succeeded the Guruship, many were in doubt about his worthiness. A number of incidents indicate that the new Guru though young was highly intellectual, had a deep knowledge of the scriptures and was a highly illumined soul. It is said that a learned scholar of Hindu literature questioned him about the meanings of the Gita. The Child-Guru then called a water carrier and asked him to explain and when the unlettered man miraculously expounded the philosophy the stunned scholar asked forgiveness and is later said to have been highly influenced by the compassion and teachings of the Sikh faith and eventually embraced Sikhism. Guru Har Krishan had a melodious voice and could sing sacred hymns very well. He would visit sick people, arrange medical aid and took care that the devotees who came to Kiratpur were well looked after. People came to him with pain and agony filled hearts and left in joy and hope. He illumined the peace of divine wisdom and had an alert mind full of calm confidence. To him, religion meant love and intense concern and care for the poor and the destitute. 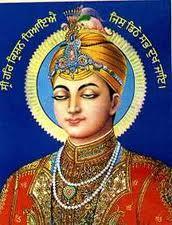 One of the main activities of the Guru was to get excellent Caligraphists and scribes to prepare copies of the Adi Granth and other prayer books and he even autographed some of these copies which are still preserved in the Shri Takht Patna Sahib. Another daily activity was to address the problems of numerous truth seekers and devotees who approached him. He advised everyone lovingly whether literate or illiterate that a Sikh’s commitment is first to God, his faith and truth.

Soon stories of his compassion and charity spread far and wide. Once he granted true knowledge to a leper who realised that it was not the body and its maladies that were important but the cancerous illnesses that were eating the soul like selfishness, cruelty, dishonesty etc. He was amazed at the Guru’s compassion for him for he realised the Guru not only carried the human sorrow in his heart but also had power of action and strength of healing. For the first time in his life, having been shunned by all, he heard someone having faith in the hidden dignity of the soul. A new consciousness and power awoke in him by hearing the Guru’s words. This unleashed a healing energy in him causing his leprosy to disappear and he got cured.

Within a year Guru Har Krishan consolidated his position even in distant centres or Sangats. The influence of his brother Ram Rai who was trying to cause trouble for him greatly waned and his following decreased. But Ram Rai was not to be thwarted and approached Aurangzeb to use his influence and convince the Sikh Guru and his followers to accept him(Ram Rai) as their true Guru. Aurangzeb agreed to help him as he felt that by doing so Ram Rai would become a tool in his hands as he could get him to spread Islam in Punjab and also set the two brothers against each other thus weakening the Sikh following. Aurangzeb thus summoned the Child-Guru Har Krishan to his court. He was met by Raja Jai Singh and installed in his palace. His mother decided to accompany him to convince Aurangzeb that Har Krishan was the rightly chosen Guru and dissuade her elder son Ram Rai from causing further harm to Guru Har Krishan. Many prominent and leading Sikhs also accompanied him. En route he continued to meet followers and advise and guide them. At Delhi thousands flocked and were blessed by the Guru and heard his divine words. In order to test him it is said that Raja Jai Singh asked him to identify the queen among all the ladies of his family present even though she was dressed in disguise as a maid and the young Har Krishan immediately did so correctly. The Raja was impressed by his foresight. Observing him and his divine countenance Raja Jai Singh was convinced of his spiritual stature and enlightened personality.

Suddenly cholera broke out in some parts of Delhi. The ever compassionate Guru immediately went to offer succour to those affected. There was suffering and death everywhere. The Mughal administration was helpless in the face of this epidemic. The Guru asked his physicians to accompany him to the affected areas. He delivered medicines and spoke compassionately to the sick. His very presence brought relief and many were healed in this manner. The faith and devotion of the people increased. Then there was an outbreak of small pox following this and undeterred the Guru continued to move among them like a messenger of peace and hope. He gave food to the hungry, clothes to the needy, medicine to the sick and afflicted and peace to the agonised minds in those trying times.

While helping and caring for the small pox victims, he himself contracted the deadly disease. It is said that it was so rampant in Delhi that the Guru out of compassion took it upon himself to absolve the inhabitants of Delhi from it. Raja Jai Singh got a tank excavated and the Guru dipped his feet in the tank and anyone who was afflicted by the disease and bathed in the tank was said to have been cured of the disease. Calling for five coins and a coconut he uttered ‘Baba Bakala’ meaning his successor was to be found in the village of Bakala in Punjab. He breathed his last on 16th April 1664 at the age of 7. His body was cremated in the place where now stands the Gurudwara Bala Sahib as he was referred to as Bala-Pir or the child prophet. Guru Tegh Bahadur his grand uncle who lived in Bakala was made the next Guru.

Guru Harkrishan dispelled people’s sorrows, fulfilled their expectations and ambitions and erased evil from their minds. He imparted to them the Light of the Divine Name of God and inspired them with righteousness, patience and charity. Devotees came from distant lands to seek his benediction and healing touch. He removed their affliction and cheered them up. Sikhism flourished and he illumined the hearts of all those who approached him. Inspite of his tender years his spiritual attainments came with his status of Guruship. In the Sikh holy scripture Guru means Jyot or Divine light implying that once the Guruship is installed then a person’s age, experience or intelligence has no value. The power and glory of the Divine light is beyond human comprehension. Thus it was that Guru Har Krishan came as a beacon of light to lead souls from darkness to salvation.