The period at the time of the succession of Guru Har Rai the new Guru was marked with battles and efforts to divide the Sikhs and their teachings. It was turbulent times as the earlier Guru had selected his grandson to the next Guruship when he was only 14 years old at that time. The Minas were a sect led by Prithvi Chand, the eldest son of the fourth Guru Ram Das who was upset at not being given the Guruship and strived to divide the Sikhs and create problems for them. The immediate task of the new Guru was to dissociate the Sikhs from the influence of the Minas and remove some of the Masands (the local community leaders who looked after the sangats or Sikh centres) who were inefficient and corrupt.

Guru Har Rai was the son of Baba Gurdita and Mata Nihal Kaur and was born on 16th January 1630 at Kirtapur. As a youth he received martial training and was adept with weapons and horses. Once when young it is said that while walking, his robe got caught in a rose bush and damaged its petals. From then on he was careful to harm nothing that came his way. He tended to animals when they were wounded and cared for them and even established a zoo to rehabilitate them. Soon he was married to Sulakhni, the daughter of Shri Daya Ram. They had two sons, Ram Rai and Har Kishan.

Guru Har Rai was a man of peace but he continued to retain the armed Sikh warriors earlier maintained by his grandfather. He showed a good combination of tenderness and strength. He built a herbal hospital and research centre to care for the sick at Kiratpur. He was not passive and followed a policy of masterly inactivity. He concentrated on strengthening the pillars of Sikh faith but tried to stay away from the politics of the times. The Mughal king at that time was Shahjahan. When his favourite son Dara Shikoh fell seriousy ill, on his request Guru Har Rai supplied rare herbs which saved his life. When asked why he had saved the life of the enemy who was tormenting him, he replied full of compassion that when man plucks with one hand and offers it with the other, the flowers perfume both hands alike. Similarly the sandalwood perfumes even the axe which cuts it, likewise the Guru returns good for evil. The King offered him land as gift in return which he declined to accept. He stressed the importance of langar, insisting that everyone who came should be fed and none should be turned away hungry. He advised Sikhs never to cheat and work honestly. He stressed that hymns benefited heart and soul and explained the importance of early morning worship and scripture. He said that just as perfume clings even to a broken vase and a knife cuts whether one is aware of it or not, prayers even if not properly understood would help them and lead to salvation. He advised rulers to govern mercifully, avoid oppression, abstain from drink, be faithful to their spouses and be always available to their subjects. He suggested that they build schools, wells and bridges for the people. He tried to avoid direct confrontation or controversy with the Mughal rulers.

The Guru concentrated in spreading the teachings of the Sikh Gurus. He visited many regions like Lahore, Sialkot, Pathankot, Ramgarh and many places in the Jammu and Kashmir region. He established 360 Manjis (Sikh missionary seats). He appointed pious and committed personalities as heads of the Manjis and thus tried to improve the old corrupt Masand system. He made several tours to the Malwa and Doaba regions of the Punjab. 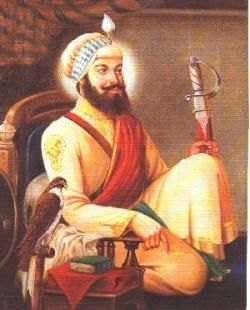 There was a devout Sikh named Bhai Gonda who used to stay with the Guru. He was a great devotee and a saint in thought word and deed. Pleased with his love and sincerity, the Guru asked him to go to Kabul and preach the Sikh faith and instruct the Sikhs to worship the true name. He asked him to feed the poor and the holy in Kabul with the offerings received and to send whatever remains to the Guru for the upkeep of the Langar. On arriving in Kabul he cheerfully set about his task by building a Gurudwara there inspite of the Muslim population living there. One day during prayer he felt as if he was actually clinging to his Guru’s feet and in that deep state he fell unconscious. The Guru meanwhile was in Satsang, soon it was meal time and everyone got up to go for it. They found the Guru still sitting and asked him to accompany them but the Guru said that he could not do so until Bhai Gonda completed his meditation and released his feet. After many hours Bhai Gonda came out of his trance and only then did the Guru feel free to take his meals. Such was Bhai Gonda’s devotion and the Guru’s compassion.

Aurangzeb summoned Guru Har Rai to his court but the Guru sent his elder son Ram Rai on his behalf. In answer to a query by Aurangzeb in order to please him and gain more sympathy Ram Rai made a small change in the sacred Sikh text Guru Granth Sahib. When the Guru came to know of this incident he excommunicated him from the Sikh Panth and never met him even though Ram Rai was repentant. The Guru was very strict against any changes in the text and teachings of Guru Nanak. He then installed his younger son Har Kishan as the next Guru. It is said that when he was asked on what basis he had made the selection the Guru asked one of them to insert a needle in the leg of the cots of both the sons where they sat to recite their prayers. The needle inserted in the leg of Har Kishan’s cot penetrated inside while the same did not happen in Ram Rai’s case. The Guru explained that it was symbolic of the softness in Har Kishan’s heart and the hallmark of a true Guru was compassion. Even though Har Kishan was only very young at the passing away of the Guru the Guru could foresee the character of the young child.

Guru Har Rai passed away at Kiratpur on 6th October 1661.

Guru Har Rai was an epitome of tenderness and compassion. Nothing pleased him better than doing good to others. He would always say that one could repair or rebuild a temple or a mosque but not a broken heart. Inspite of his policy of non involvement of political affairs, he undertook rapid tours and conducted Sangats to strengthen the Sikh faith. He encouraged Sikhs to have direct links with him in case of need without the intermediate presence of the Masands. They were exhorted to be fearless and have firm faith in God. At individual and social levels they had to behave as role models of society full of kindness and compassion. The Guru’s disciplined demeanour, charismatic personality, his equipoise and enlightened countenance deeply impressed the people. He would take his meals with people in hutments without any difference in status. Morning and evening he would discourse on the Guru’s words and listen to devotional music. He emphasized to his followers that without altruistic service and humility, mere knowledge of the Divine was of no avail. He stressed on the Guru ka langar as the way to achieve equality and brotherhood among all.