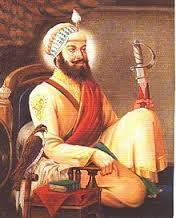 The fifth Guru, Guru Arjan Dev was killed because of the religious conspiracy of some high caste Brahmins, some bigoted Muslim Ulemas and some other politically motivated Muslim governors. This completely changed the entire character of the peaceful socio religious reformation movement. There was a need to safeguard the rights and welfare of the newly developed masses. When Emperor Akbar who had a high regard for the Sikhs passed away, his son Jehangir came to power. The tide then turned against the Sikhs. It is said that advised by conspirators against the Guru, within 7 months of assuming power he had Guru Arjan Dev executed. Guru Arjan Dev had foreseen this deed and had warned everyone to be prepared for it. The Sikhs began to think seriously on ways to counter the high handedness of the mighty Mughal Empire. Thus due to force of circumstances a great change took place in the character of the Sikh nation. Such was the need of the hour that now the Sikh nation had to adopt both a spiritual and political path simultaneously which suited the economic and social segments of the Sikhs. Now the Sikh became a Saint-Soldier. Thus the next Guru, Guru Hargobind the son of Guru Arjan Dev faced great challenges as he was only eleven years old during the Martyrdom of his father, the earlier Guru and was destined to carry a heavy burden on his tender shoulders from a very young age.

Guru Hargobind was born to Guru Arjan Dev and Mata Ganga on 14th June 1595 at Wadali. His mother was blessed with a son twelve years after marriage with the blessings of Baba Buddha who was a realised soul and had been blessed by the First Guru, Guru Nanak and had been an elder in the Sikh community during the reign of all the other Gurus as he lived upto a ripe old age. At the age of six, he started his formal education under the guidance of Baba Buddha. Besides Gurbani and other spiritual teachings, in keeping with the political milieu he was taught martial arts, hunting, wrestling, riding and the use of weapons. Thus Hargobind grew up to be an all-round man, healthy and strong as well as well versed in Gurbani and an enlightened person. Also he was greatly influenced by the philanthrophic activities of his father Guru Arjan Dev. Soon, it was time for him to get married and he had five sons and one daughter. 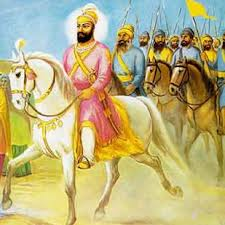 Guru Hargobind wore two swords, one of Spiritual Power -Piri and one of Military power- Miri. He issued several letters advising the Sikhs to take part in martial arts and military training. Riding, hunting and wrestling were also introduced. Martial songs like ‘Vars’ or ballads were sung in the Guru’s darbar to inspire the Sikhs of heroic deeds. He erected a wall around Amritsar city and constructed a small fort named ‘Lohgarh’ (fortress of steel) on the outskirts of the city. In front of Harmandir Sahib (Golden temple) he revealed the Akal Takht (Throne of the Timeless God) and this place became the seat for praying and preaching in due course of time. Discussions were held here on the various problems faced by the Sikhs. Guru Hargobind’s darbar was noted for its splendour and he excelled in state matters. As the training continued he soon had a big infantry and cavalry. There were trained guards to protect him. Besides a throne, he adopted all emblems of royalty such as umbrella, sword, crest and hawk and was called by the Sikhs as a true king or ‘Sacha Badshah’ as not only was he handsome and brave but also holy and pure in deeds. All Sikhs came for guidance here and this contributed a lot to the consolidation of the Sikh movement. He took great interest in the propagation of religion and he appointed preachers and himself undertook various tours to propagate his faith. The Masand system still continued and he instructed that in addition to food, money and service the Guru shall accept horses and weapons as voluntary contribution (Daswandhs) of the Sikhs to the Guru’s funds. These offerings were in turn used to train the Sikhs in martial arts and other sports. He encouraged the Sikhs in their spiritual life with recitation of hymns from the holy book Adi Granth and preached the philosophy of life and love for God. Morning and evening Sangat or congregation for prayers to God were regularly held. The trader devotees were encouraged to expand their commercial activities. They influenced the hilly Rajas with their lofty ideals who impressed became followers of the Guru. This brought about economic progress and socio political reorganisation among the masses. It is said that Jehangir was occupied with his internal affairs in Gujarat and Kabul and had no time to look into the growing power of the Sikhs so this gave them a little time to consolidate their power.

The Guru’s growing military power and popularity became a cause of threat to the Mughals and the high caste Brahmins and among them were included some corrupt Masands also. Chandu Shah an official in the Mughal court wished for an alliance with the Guru for his daughter which was refused. Also he was responsible for instigating the killing of the earlier Guru, Arjan Dev so he was apprehensive about the Guru’s growing power as he was liable to take revenge on him. Hence he began to instigate Emperor Jehangir against him. Jehangir ordered the Guru’s imprisonment but fearing a revolt from the Sikh population who had grown greatly in numbers and who were still traumatised by the execution of the earlier Guru, he was released and along with him were released 52 other princes in captivity due to which the Guru was referred to as “Bandi Chor’ or one who freed the convicts. This day is celebrated by the Sikhs as ‘Bandhi Chor Divas’. But the peaceful spell did not remain long as after Jehangir’s death, his son Shahjahan became King and relations became bitter again. Four battles were fought between them and the Guru won all 4 of them. His purpose was always defensive so he did not acquire anything from these victories. But a new heroism was rising in Punjab which gave people the courage to resist the mighty power of the Mughals. After this, the Guru shifted his base to Kiratpur and spent the last ten years of his life there in meditation and prayer. It is said that Chandu was pelted with stones and beaten to death by the people as they wanted to avenge for the conspiracies and battles he instigated and for the execution of their beloved former Guru Arjan Dev.

The last few years of Guru Hargobind’s life were saddened by a number of personal tragedies. Three of his sons died in quick succession and one son turned against him. He finally chose Har Rai his grandson, one of his eldest son’s sons to succeed him as the next Guru. He died on March 3rd 1644 at Kiratpur at the age of 48.

Guru Hargobind was Guru for 37 years which were really testing times for the Sikhs after the execution of the earlier Guru. The community was tested whether they could stay united under adversity and Guru Hargobind succeeded marvellously in this aim. He infused in them the strength and confidence to challenge the might of the Mughals. He was extremely compassionate and believed that service to man was service to God. It is said that such was his splendour that Swami Samarth Ramdas, a saint from Maharashtra who met him was so infused by his ideals of spirituality with military prowess that he returned to Maharashtra and encouraged Shivaji to follow the same path which granted Victory to Shivaji and made him King.