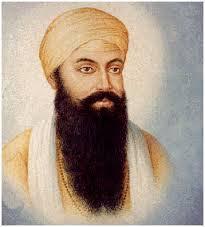 Once, a party of Sikhs were on their way to pay homage to the Third Guru Guru Amar Das. A young man named Jetha who was spiritual minded and always in the company of religious men saw the party and decided to join them. Upon their arrival, Guru Amar Das immediately noticed the young Jetha with his sincerity and sense of devotion. While his fellow travellers returned to their homes, Jetha decided to stay back and become a disciple of Guru Amar Das. Seeing his hard work, dedication and devotion Guru Amar Das was impressed and gave his younger daughter Bibi Bhani in marriage to him. He became a trusted disciple of Guru Amar Das and represented him before the Mughal Royal court when jealous Hindus made charges that Sikhism maligned both the Hindu and Muslim religions. When Jetha explained that his religion only propagated spiritual upliftment of man without caste and class differences and emancipation of women, Emperor Akbar was highly impressed by Jetha and the Sikh religion and dismissed all the charges. Eventually Jetha was ordained as the Fourth Guru and named Guru Ram Das meaning servant of God.

Guru Ram Das was born on September 24th 1534 to father Hari Das and mother Anup Devi (Daya Kaur). He was named Jetha meaning first born and was a promising and handsome child. His parents were simple, honest and pious but were so poor that to meet the daily needs he had to earn his bread by selling boiled grams. When he was just 7 years old his parents died and he went to live in his maternal grandmother’s village in Basarke in Amritsar. For five years he lived there earning his living by selling boiled grams. He often shared what he had with those less fortunate. Some accounts state that Guru Amar Das noticed him in Basarke and was highly impressed with his pleasing manner and sincerity and took him with him. Other accounts state that he came to Goindwal along with some travellers to pay homage to Guru Amar Das. He was then married to Guru Amar Das’s younger daughter Bibi Bhani. They had three sons and Jetha continued to live with his father in law and deeply associated himself with all activities and commanded full confidence of Guru Amar Das. He often accompanied him on all his trips. Inspite of his relationship with the Guru as his son in law, he continued to perform his duties as a servant like washing utensils, serving drinking water to the Sangat, digging of the tank and other activities such as service in the langar etc.

Founding of the Golden Temple

Jetha was bequeathed a parcel of land by Emperor Akbar as a wedding gift to his wife Bibi Bhani. He purchased an adjacent tract of land and under the direction of his father in law Guru Amar Das, he began the excavation of two sarovars or tanks of sacred water called Amrit-sar and Santokh-sar. He laid the foundation site of a township around Amrit-sar which eventually became the Golden Temple of the Harmandir Sahib complex in Amritsar.

After he was ordained the fourth Guru by Guru Amar Das, he carried on the efforts to organise the structure of the growing Sikh community. He appointed Directors or Masands to distribute and collect the offerings made at the various manjis which were the established provincial seats of Sikhism. He exemplified piety, humility and compassion. Once when he was visited by the son of Guru Nanak who was an ascetic, he was asked why he had allowed his beard to grow so long. Guru Ram Das replied that it was to wipe off the dust from the feet of great souls and humbly proceeded to wipe the feet of the ascetic. The ascetic was stunned and said that he was selected rightly for Guruship.

Completion of Ramdaspur or Amritsar

He continued building the city of Ramdaspur by digging the Amrit-sar tank as instructed by his Guru Amar Das. A large number of pilgrims came to help in the excavation work of the tank. The holy tank was renamed Amritsar or pool of nectar. In the present day the city of Ramdaspur too has come to be known as Amritsar. He emphasised that one could not fulfil life’s goal just by quiet meditation but by participating in the joys and sorrows of others. In this way one could destroy ego and develop compassion for others. The new city of Ramdaspur flourished as it was situated at the centre of international trade routes. It became an important centre of trade in Punjab. Guru Ram Das himself invited many merchants and artisans from different trades and walks of life. He began his missionary activities here in the new centre on the instructions of his Guru.

One of the new entries into the Sikh fold was Bhai Gurdas Bhalla who was the nephew of the earlier Guru, Guru Amar Das. He was a superb poet and scholar of comparative religion who later on went on to become the scribe of the First edition of the Guru Granth Sahib. The earlier Guru was highly impressed with his Hindi, Sanskrit and the Hindu scriptures and hence Guru Ram Das deputed him as one of the Masands to Agra to spread Sikhism. He was a great asset to the Guru’s mission. He was a highly respected Sikh and loved by the entire community.

Guru Ram Das reorganised the missionary centres into a new order called Masands which functioned under proper rule books and the system of collecting funds called’ Daswand’ which codified the laws for Sikh way of life. The Guru became not only a ruling guide but a spiritual Sovereign. The foundation for Amritsar became a central place for consolidating Sikhs as a nation. It became the power centre for worship similar to Mecca for the Muslims. It became a symbol of unity as Sikhs living far away deemed it their holiest duty to pay homage at this holy place and have a dip in the tank of nectar. He codified the daily code of conduct for the Sikhs.

He composed the Lavan, the four hymns of the Sikh Marriage Rites. In it he defines marriage as a spiritual union, one soul in two bodies. The standard Sikh marriage ceremony known as the Anand Karaj is centred around it. The married couple circumscribe the Guru Granth Sahib as each hymn is read. The first round is the Divine Consent for commencing the householder’s life through marriage. The second round states that the union of the couple has been brought about by God. In the third round the couple have been described as most fortunate as in the company of the saints they have sung the praises of the Lord. In the fourth round the description is on the feelings of the couple who have obtained their hearts desire and are being congratulated.

He wrote 679 hymns in 30 ragas which are a part of the Guru Granth sahib. His Bani is also part of the Kirtan Sohila and Rehras Sahib, the daily prayers of Sikhs. He was said to be a Master composer and his hymns touched the heart and had an ecstatic effect virtually hypnotising the listeners. Like the earlier Sikh Gurus he had mystical visions and wrote songs explaining human experience and the nature of the Divine.

Some of his hymns-

Who can take me to meet my beloved Lord

The Lord is merciful so

I met my true Guru and

2)   The one who repeats the Divine Name

Is a most dear Disciple

By this procedure is washed away

The sins of his soul

I seek to kiss the very dust

Under the feet of such a one

Who recites the name

And inspires others to do so.

Guru Ram Das had three sons Prithvi Chand, Maha Dev and Arjan Dev. Prithvi Chand looked after the Langar and its arrangements, kept an account of the offerings and funds and took care of the visitors. The second son Maha Dev had a religious bent of mind, loved solitude and did not have an interest in worldly affairs. The third son was sensitive, devoted and had saintly qualities. Once a cousin of Guru Ram Das invited them for a wedding. The Guru unable to attend asked his eldest and youngest son to attend but Prithvi refused as he held a position of importance which he did not want to lose in his absence. The youngest son Arjan Dev agreed and the Guru asked him to stay there till recalled. Arjan Dev missed the guru and wrote two letters in verse but it was intercepted by Prithvi who did not disclose them to his father-Guru. Then Arjan Dev wrote a third one sending it personally by messenger to his father marked’3’.As soon as the Guru received the letter he realised what had occurred and he was moved by the sincerity and humility expressed in the verses. He made up his mind to anoint Arjan Dev the next successor. This enraged Prithvi and he began to behave rudely to his father and younger brother. Guru Ram Das was much grieved and he held a congregation of the Sikhs and ordained Arjan Dev as the next Guru. He breathed his last on the same day at the age of 47 on 1st September 1581. He was a Guru for only seven years.

Guru Ram Das was a symbol of piety, devotion and peaceful disposition. His humility was legendary which was proved by the following words of his-

‘I was roaming unknown and uncared for

When I came into the service of a True Guru

Was raised into such significance.’