In: Festivals Of The Month, Gurus, Sikh Gurus
With: 0 Comments 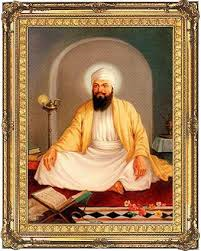 When the earlier Guru Har Krishan appointed his successor mentioning ‘Baba Bakala’ before he passed away, it is said that a number of false contenders from Bakala village in Punjab came forward for the Guruship. To test them one of the well known Sikh personages who had prayed to the Guru that he would offer 101 Gold Mohars if his ship filled with merchandise survived a storm which it had got caught in came forward. He offered two mohars to all the contenders who accepted it quietly except Tegh Bahadur who immediately asked for the remaining 99 mohars indicating his Divine foresight. Immediately it was proved that He was the true Guru and was successfully granted the Guruship.

Guru Tegh Bahadur was born on 1st April 1621 in the holy city of Amritsar. He was the fifth and youngest son of Guru Har Gobind the Sixth Guru and Mata Nanki. He was named Tyag Mal and he was called Tegh Bahadur when he proved to be a great sword fighter after the battle of Kartarpur where he won and was barely 15 years at that time. From his very childhood he used to spend most of his time in meditation. He rarely played with boys of his age. The atmosphere at his home also being very spiritual he developed a philosophical bent of mind and aspired to lead a life of selfless sacrifice and service. He began schooling at the age of six and he also learnt vocal, instrumental and classical music. He was also taught the Gurbani and Hindu Mythology. To combat the prevailing political atmosphere at that time he was also given military training in swordsmanship, horsemanship, shooting and javelin throwing. Soon, he was married to Gujri, daughter of Shri Lal Chand a noble and rich man. His wife was religious, modest in temperament and disciplined in behaviour. After the death of his father Guru Har Gobind, his mother took him and his wife to her native village of Bakala in Punjab where they are said to have lived peacefully for the next twenty years. Leading a life of peace and meditation, he was the first to bow to the new Guru selected by his father and never contested his will. He paid a visit to many holy places like Goindwal, Kiratpur, Haridwar, Prayag, Kashi etc and on hearing of the passing away of Guru Har Rai he decided to return to Kiratpur. On the way back he reached Delhi where he learnt of the arrival of the new Guru Har Krishan and along with his mother paid him a visit expressing deep sorrow and sympathy. After he was selected and confirmed as being the new Guru, he and his family left for Amritsar to pay obeisance at the Harmandir Sahib. But the family having control of the temple at the behest of the Masands (the heads of the Sikh centres) refused to give him entry. The Guru waited awhile but when they refused to open the doors, he finally left and stayed in the humble dwelling of a peasant couple. Later the women of Amritsar came and regretted the shameful behaviour of the Masands. Highly pleased with their devotion the Guru blessed all the women for their devotion and courage. He later bought some land and founded a new town Chak-Nanki after his mother. Later the town was renamed Anandapur Sahib.

To strengthen the Sikh nation he undertook a long journey to renew the old Sikh preaching centres and set up new ones. Wherever he went large crowds gathered seeking his blessings. The Muslims fearing his ever increasing popularity, arrested him and his entourage and produced them before the Mughal King Aurangzeb. He handed them over to Raja Ram Singh, son of Raja Jai Singh. But the whole family of Raja Jai Singh were staunch followers of the Guru and did not treat them as prisoners but instead treated them reverentially with great respect and strived to secure releasing orders from Aurangzeb. He was finally released after two months. Guru Tegh Bahadur then proceeded further towards Dacca where he held Satsangat and Kirtan and delivered religious sermons daily meditating wherever he went thus sanctifying all the places he travelled.

Meanwhile Aurangzeb began to be intolerant towards Hindus and Sikhs. He introduced many programs like religious taxes for Hindu pilgrims and special taxes for Non Muslim traders. Guru Tegh Bahadur was soon arrested in view of his policies but released shortly. 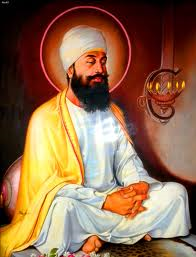 He returned to Anandapur Sahib and began peacefully preaching to the masses and identifying with the sorrows and difficulties of the masses. He set out on another religious tour towards Malwa region in Punjab. Seeing the area being so socially backward and neglected inspite of the people being hard working and honest, he began helping them in many ways. He assisted them in planting trees on barren stretches of land. He dug many community wells to cope with the scarcity of water. Many cattle heads were distributed free of cost among the poor and landless farmers and they were advised to start dairy farming. Many Muslims seeing the devoted spirit of brotherhood and the kar Seva or free service performed by everyone were transformed and embraced Sikhism. This began to create a fear psychosis among the Muslim rulers and they began to spread false propaganda against the Guru. Aurangzeb was enraged and began to commit atrocities against the non Muslims. Thousands of non Muslims especially the Kashmiri Pandits were forcibly converted to Islam or were tortured and their property looted. All of them approached the Guru and requested him to protect their honour and faith. He made up his mind to sacrifice himself for the cause of Dharma and righteousness. On his advice the Kashmiri Pandits submitted a petition in Aurangzeb’s court and later the Guru was summoned to the court. Meanwhile the Guru had installed his son Guru Gobind Singh as the next Guru and proceeded towards Delhi where he was arrested and tortured. He was asked to either show miracles or embrace Islam or prepare himself for death penalty. But the Guru remained calm and adamant. He was then executed on November 11th1675. One of his devoted followers carried the severed head to Kiratpur Sahib where he was received with great honour by his son Guru Gobind Singh. The cremation of the head was carried out with full honour and proper ceremonies. The body too was stealthily carried away by another devoted Sikh who burnt his house along with the body in reverence thus cremating it.

Effect of the Guru’s Martyrdom

The martyrdom of Guru Tegh Bahadur deeply influenced the history of India. It highlighted the tyranny and injustice and increased hatred for Aurangzeb and his rule. The Sikh people felt that they could protect themselves only by taking up arms and proposed the way for the final stage in creation of the Khalsa which was a path breaker in the history of India.

He wrote Gurbani(59 Sabadas) in fifteen ragas apart from 57 shlokas which are included in the Guru Granth Sahib. The most striking element of his compositions were his unflinching faith in God and his desire that people should realise the truth that Nirvan or liberation was the goal of life. His hymns were the expression of the illumined soul. His verses were a rich repository of mystic expression and contained glimpses of deep truths in the spiritual world. They were concerned with the emancipation of the individual from the bondage of ignorance and limitations.

‘Vairag’ or Dispassion was the prominent theme of his compositions where the individual controlling his passion and desires becomes indifferent to the fleeting pleasures of the senses and by constantly fixing his mind on the Absolute develops the urge to reach Godhood.

His verses propounded the transient nature of the material world, suffering, ignorance and attachment. Kaal or the mighty factor Time was all powerful and everyone perished in its claws. The verses spoke about the Sadhana or the path the aspirant has to take one pointedly if he wished to break away from the cycles of birth and death and achieve Union with the Lord.

Some of his hymns are-

He who dwells in all hearts

And remains ever pure

Just as fragrance fills the rose

And reflection the mirror

The Lord pervades all

Search him inside thee

The Guru reveals that Only The One pervades inside and outside

The veil of doubt can never be removed’’.

2)’’ Mother, I have obtained the wealth of God’s name

My mind is rid of running here and there

It has found its rest

Illusion and desire have departed from the body

The pure knowledge of God has dawned.

Greed and delusion do not touch me

Doubt of birth and death is no more

I have obtained the jewel of his name

My mind is absorbed in bliss

He alone sings the praises of Hari

On whom the Ocean of Grace showers his compassion

Only by some through the Guru’s Word.’’

Guru Tegh Bahadur was a great poet and thinker. He was a man of true wisdom. He sacrificed his life for the cause of truth, Dharma and the betterment of humanity. He is also known as ‘Hind Di Chadar’ or the Shield of India as he gave up his life to protect the religious freedom of Non Muslims in Mughal India. He was a warrior, a family man with social commitment and a preacher of great vision and understanding. By his teachings and prolonged travels he created new energy and environment which encouraged the Sikhs to delve deeper into their faith. He was very sensitive to people’s sufferings and taught them to be brave and fearless. The Guru, enduring hardships throughout his life faced trials and tribulations in the spirit of complete detachment. He bore no ill will towards anyone including his enemies. His hymns and verses clearly depict his state of Enlightenment and even today inspire man to reach greater heights of God realisation and liberation.