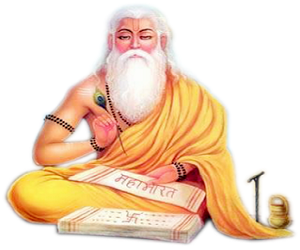 Asita was one of the famous disciples of Sri Veda Vyasa. He was born in the Dwapara Yuga in the present day Varanasi, to a pious Hindu family. At his young age, he spent his life by playing gambling, and enjoyed all sorts of material comforts in his life. In course of time, he lost interest in worldly affairs, and become a disciple of Sri Vyasa Bhagavan, an AMSHA of Lord Vishnu, and concentrated his entire attention on worshipping Lord Vishnu and served his Guru in a pleasing manner.

He learned Vedas and the Hindu Holy Scriptures from his guru Sri Veda Vyasa, and as per his instructions, for a few years, he performed meditation in the mountain caves of the Himalayas. And after getting enlightenment through his severe penance, he again joined with his Guru Veda Vyasa, at his Ashram, and helped him in writing the Hindu Holy Texts. He was very fond of Pandavas, and he was a sincere devotee of Lord Krishna. While Veda Vyasa had went to Bhadri, he also accompanied with his guru, and it is believed that he is still serving his guru Veda Vyasa, along with Sri Madhwacharya, a great Madhwa Saint, who is also serving in a pleasing manner to Guru Veda Vyasa. It is believed that after the end of the Kali Yuga, he would attain Salvation, and reach the abode of Lord Narayana, the Vainkunta.