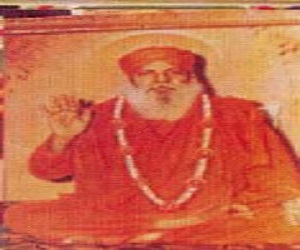 Swami Basantram was a famous saint of the Prem Prakash Mandal. He was born in the year 1903 in a village in Sind Province, Pakistan to a pious Sindhi family, and from his childhood itself he was a very religious minded person. While studying in the school itself, he would chant the Hare Krishna Mantra repeatedly, and also he would ask his school friends to chant the mantra. During his school annual holidays, he worked in the agricultural fields of his father, and at that time, he used to provide food crops to the birds, along with water to quench their thirst.

Once he attended a divine discourse of Swami Teunram Maharaj in his village, and due to that, he accepted Teunram, as his guru, and as per his advice, he went to Hardiwar and studied the Hindu religious texts, and attained good knowledge in Vedas, Shastras and in other holy texts. And after becoming a great scholar, he joined with his Guru Teunram Maharaj, and travelled along with him to various holy places like Mathura, Pandharpur and Puri, and eagerly worshipped Lord Krishna. After a few years, he came to Ajmer, Rajasthan and founded Prem Prakash Mandal, and done lot of religious discourses on Vishnu Purana, Bhagavatham and Bhagavat Gita, and also done social services like providing food to the poor, helping in the marriage of poor girls, educating the poor children etc. Swami Basant Ram travelled throughout India, and spread the spirituality amongst the people, and he guided his followers in the spiritual path, and made them to attain enlightenment.