In: Gurus, Holy Mother
With: 0 Comments 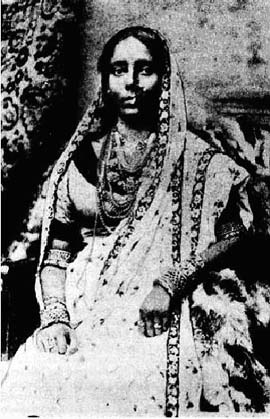 INTRODUCTION
Chandramani Devi (19th century AD) was the holy mother of Bhagavan Sri Ramakrishna Paramahamsa, and at her younger age she got married with Sri Khudiram Chattopadhyay, who was a learned scholar. Though her husband was very poor, she didn’t hate him, and served properly to her husband, and acts as an example for others. She gave birth to Sri Ramakrishna during the year 1836 in the village of Kamarpukur, West Bengal. Her son Ramakrishna’s birth name was “Gadadhar”, since Lord Vishnu had appeared in her dream, and told that her son would be born with the AMSA (features) of his divine weapon Gada (Mace).
Mata Chandramani Devi was a worshipful woman, since she was blessed with the divine child, Sri Ramakrishna. She taught many good things to her son, and took him to the Dakshineswar Kali Temple regularly. She would ask her son to meditate on Mata Kali, in order to seek her divine grace. Though she was very poor, she used to offer food to the poor people in the nearby localities, and she would partake her food with the visiting guests at her home, and most of the days, she would drank only water and she would do puja to Mata Kali by offering flowers and fruits, and by chanting her various names and stotras.
After serving the goddess and the people in a whole heartedly manner for some years, she attained SALVATION.
Let us worship Mata Chandramani Devi and be blessed.
“OM MATA CHANDRAMANI DEVIYE NAMAHA”
“OM SRI RAMAKRISHNA PARAMAHAMSARE NAMAHA”
“JAI KALI MAA”
WRITTEN BY
R.HARISHANKAR