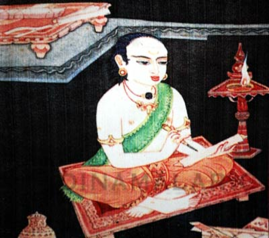 Kari Nayanar is one of the 63 nayanar saints, and was a great worshipper of Lord Shiva. He rendered a famous Tamil text named as Karikkovai. Hence he was called as Kari Nayanar.

Kari Nayanar was born in a Brahmin family in Thirukkadaiyur, Near Amritaghateswarar – Abirami Temple and the ancient Thirukkadaiyur Mayanam temple. He was an ardent Shiva devotee and also a learned scholar.      He composed devotional songs on Lord Shiva. He spent his wealth for providing food to the devotees of Lord Shiva. He also constructed Shiva temples, and maintained the temples in a proper manner. He also regularly visited and worshipped the shiva temples in his region, and performed puja and abhishekham to Lord Shiva. He chanted the shiva panchakshara mantra on a daily basis, and he used to take food only after chanting the mantra. He also donated clothes and given shelter to the poor shiva devotees, and fulfilled all their basic amenities.

During the Tamil month of Masi  his birthday is widely celebrated as Guru Puja Day in the shiva temples.

Being a pious Brahmin, he dedicated himself to the service of Lord Shiva. He doesn’t distinguish the devotees of Shiva with regard to their caste and community. He treated everyone as the messengers of shiva, and provided good service to them. He got sufficient wealth from the kings, in appreciation to his famous poems, but utilized the entire money towards doing service to the god and to the servants of the god.

Daily he used to get up early in the morning, and worships Lord Shiva in the temples and conducted pujas in the temples and offered Prasad (food offering) to the god, and also donated food to the devotees of Lord Shiva and to the poor. He had continuously done this work till the end of his life. Through his sincere and dedicated service to the god and his devotees, after his death, he attained MOKSHA and merged with the god.