Pandurang Shastri Vaijnath Athavale (October 19, 1920–October 25, 2003), also known as Dada-ji which literally translates as elder brother in Marathi, was an Indian philosopher, spiritual leader, social reformer and Hinduism reformist, who founded the Swadhyay Movement and the Swadhyay Parivar organization (Swadhyay Family) in 1954, a self-knowledge movement based on the Bhagavad Gita, which has spread across nearly 100,000 villages in India, with over 5 million members.

During his journey he had many honored moments one of that was when he was awarded the ‘Templeton Prize for Progress in Religion’ in 1997. Another one was the Ramon Magsaysay Award for Community Leadership and India’s second highest civilian honor, the Padma Vibhushan in 1999.

Pandurang Shastri Vaijnath Athavale was born on October 19, 1920 in the village of Roha in Maharashtra (konkan) India. He was one of five children of Sanskrit teacher Vaijnath Athavale and Parvati Athavale. At his young age when he was just twelve years old his grandfather supported him thoroughly while setting up independent study plans and courses with separate tutuion. Hence, Athalve had a privilege of learn more and fast while learning the same things taught in a system very similar to that of the Tapovan system of ancient India. In 1942, he started to give discourses at the
Srimad Bhagavad Gita Pathshala, a centre set up by his father in 1920.

In the year 1954, he attended the Second World Philosophers Conference, which was held in Japan. In that conference, he presented the holy concepts of Vedic ideals and the teachings of the Bhagavad Gita. However, many people rejected his ideas and wanted evidence of such ideals being put into practice in towns across India. A Dr. With his auspicious presentation and sincere efforts Wilson Compton was impressed with his ideas and offered him a post in the US. That was the place where he could spread his ideas. With great mind comes great wisdom hence he politely declined, saying that he had things to achieve. Although if he wanted to show the world a replica community for peacefully practicing and spreading the divine Vedic thoughts with the message of the Bhagavad Gita.

He established many places where he coukd preach and practice the knowledge he had. One of pillars of Swadhyay work is the Child Development Center, or Bal Sanskar Kendra. When is the right time to instill the qualities of morality, heroism, patriotism, etc. in a person? If they are instilled during the formative years of childhood, their roots penetrate deeply and result in an integrated personality. Hence traits like this are most adorable and totally visible within the thousands of children who regularly attend Bal Sanskar Kendra – child development centers.

Qualities like heroism and nobility were preached around the children by telling of inspiring stories from Vedic literature, as well as stories of contemporary heroes. These centers teach children to be grateful to God, sages and saints, to one’s country, parents, and teachers.

Swadhyay Pariwar and the Power of Youth:

“I have faith in three entities: God, Scriptures, and the Youth.” These are the words of Pujya Dada, the inspirer of Swadhyay, which has now spread widely in India and in numerous other countries. From Dadaji’s perspective, a youth is “a living symbol of an indomitable enthusiasm and will to completely change the era, tie up in knots the whole sky, and crush to pieces the mighty Himalayas”. One of his clear vision and belief was that if a youngster is drawn closer with a divine, selfless relationship and given a proper understanding of religion, spirituality, and devotion, then his latent creative tendencies and spirit are truly awakened. This can lead to a spiritual & religious revolution.

Revolutionized by his thoughts and open mind guidance his vision clearly states to know the self power and universal connectivity provided by the small things of life. It was a devotional moment he started in the state of Maharashtra and within few years’ followers from across the world started to understand and follow his vision of greatness. It was his nurture for devotional and nationalistic activities help find oneself and other to realize the truth of life, Swadhyay Pariwar put a margin to the thoughts outside a box. His simple belief is that devotion is a tide can turn the whole ocean into a calm nature once it hit the shore. Which is true, and has been followed the same by his followers with true intentions. Philosophy is a grace to life and fills in poetry to the reality, which was such as his dream for this world.

Another important aspect covered by him was the praying, which should not be limited to just temples and holy places. The within is the most divine place and looking inside it and praying is more accepted than to just pray at places which has more importance. Going into the depth he started many experiments through his philosophy and knowledge which intend to bring people closer to God and to each other. Gratitude is the key to approach smallest and biggest systems of life and as he followed that the common man life was more beautiful for him than to simple live in comforts.

His organization was not an up bound themed organization but he wanted to deliver the message and prepare the brains of society for the things they are holding different in their perception. Things like Caste, Racism, and many other cruelties we as a human practices were all started diminishing once Swadhyay Pariwar came into existence.

Swadhyay Movement is a philosophy found all over the world. “Swadhyayees”, as the divine family members of the Swadhyay Parivar are called, is made up of people from both the lower or poor classes and the upper classes. Many Swadhyayees who continue Athavale’s work in spreading his ideas throughout India and to other parts of the world are known as “krutisheels” or people of action. Over the years, his followers (Swadhyayees), have taken his message of love for God and God’s love for all to people across caste, social and economic lines to about 100,000 Indian villages, and started various cooperative farming, fishing and tree-planting projects.

some of the awards given to Athavale were:
Ramon Magsaysay Award, in Community Leadership, in year 1996.
Templeton Prize in year 1997.
Padma Vibhushan in 1999 in recognition of his efforts toward social reform.
Recognized as one of the Top Ten Most Important Indian People of the 20th Century.
Indira Priyadarshani Award in 1987 by the Government of India for Vrukshamandeer Prayog.

Tatvadnyaan Vidyapeeth is an institution in which Athavale, himself, often gave discourses to the many youths that studied there. The youths study a broad variety of religious and spiritual subjects and live as they would have done in a “tapovan” thousands of years ago.
In popular culture
In 1991, noted film director, Shyam Benegal, directed a film, Antarnaad (The Inner Voice), based on the Swadhyay Movement of the Swadhyay Parivar, with Shabana Azmi and Kulbhushan Kharbanda in lead roles. In 2004, director, Abir Bazaz made a documentary, Swadhyay, on the life and works of Pandurang Shastri Athavale.

Athavale died at 12:30 pm on October 25, 2003, in at Khetwadi in south Mumbai, India. He aged 83 years and was cremated on the evening of October 26 at Tatvadnyaan Vidyapeeth, Ghodbunder in Thane district, where around 10,000 people were present. Afterwards his ashes were immersed at Ujjain, Pushkar, Haridwar, Kurukshetra, Gaya, Jagannath Puri, and lastly at Rameswaram. 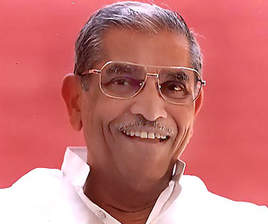 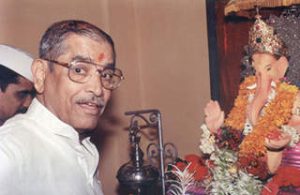 2019-06-28
Previous Post: Shri Meenakshi Pancharatnam
Next Post: Introduction: The importance of the Rishi Scientists in the ethos of India