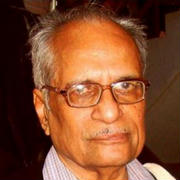 Krushna Chandra Kar (1907–1995) was a famous poet and best writer in both Odia and English. He has written many works on Odia. He was honoured by the Odisha Sahitya Academy for his great contribution in Odia literature.

He was born and brought up in Cuttack, Odisha. Krushna Chandra Kar wrote spiritual works, and children’s books. His famous Odia works include the “Ramayana” and the “Shakuntala”. He had written lot of poems in praise of Lord Rama and he is considered as a Ram devotee.

He was best known for children’s literature and his famous “Panchatantra” stories received                        world-wide recognition. He also wrote a famous text on Lord “Kapila Bhagavan“, an incarnation of Lord Vishnu.

Krushna Chandra Kar was a notable philanthropist and done lot of social services for the welfare of the society. He has written poems in praise of Hindu deities, and his works are easy to understand by any one, and written in a simplified manner.

He was inspired by the teachings of Swami Vivekananda, and used to read his spiritual books. He also visited Lord Jaganath temple of puri, and other famous temples of Lord Krishna. He was an admirer of the 16th century Odia poet-saint Salabega, and was interested in reading his divine poems on Lord Jagannath.

Though he died in the year 1995, he is still living with us in the form of his poems.