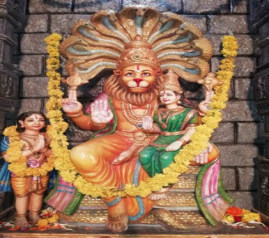 Prahlada was the staunch devotee of Lord Vishnu, and he belonged to the Rishi Kashyapa gotra. He is classified as one among the best Bhagavathas similar to Narada, Thumburu and Dhruva due to his utmost devotion on Lord Vishnu. Prahlada was available even at the time of the churning of the Divine Ocean.

Prahalada who was the great devotee of Lord Vishnu, and he was born in the Krita Yuga also called as Satya Yuga, and his parents are Ma Kayadu and Demon Hiranyakasipu. He developed Narayana bhakti even while he was staying in the womb of his mother, since Narada used to visit regularly to the place of Ma Kayadu during the time of her pregnancy and would tell about the significance of Lord Vishnu, and this made the child to develop more and more Bhakti on Vishnu in his future.

Prahalada since he became a great devotee of Vishnu, began to chant the mantra, “OM NAMO NARAYANAYA NAMAHA”, and also insisted other boys to cultivate bhakti on Lord Vishnu. This made his father Hiranyakasipu to get angry with him. He tried to correct his son Prahalada in order to stop worshipping Lord Vishnu through various cruel ways, but since Prahalada was well protected by Vishnu, the great child was saved by his beloved god Vishnu for several times.

Day by day, the cruel acts of Hiranyakasipu were increasing, and he insisted others to recite his name alone, and to stop performing Yagnas and to stop chanting the names of the deities. Due to that, the sages were unable to perform the Yagnas, and the Devas could not get their share of oblation from the fire sacrifices, and hence they went to the Vaikunta and reported about their sufferings. Lord Vishnu smiled on them, gave his blessings, and replied to them, that soon he would take the Narasimha Avatar, and would destroy Hiranyakasipu.

As per his saying, Lord Vishnu had incarnated as Lord Narasimha from the pillar of Hiranyakasipu’s palace, fought with him severely and killed him, and restored peace and prosperity in the entire universe.

PRAHALAD WAS CROWNED AS A KING

After the killing of Hiranyakasipu, Narasimha had embraced and gently rubbed the body of Prahalada, and along with the presence of other deities like Brahma and Shiva, he crowned Prahalada and made him as a king for his kingdom. He was blessed by all other deities, and sage Narada had gave valuable teachings to Prahalada in order to rule his kingdom efficiently and effectively.

Similar to Rama’s rule, Prahalada had given a golden rule, and he was praised by everybody in his kingdom. Though he was born as a demon, he looked very handsome similar to a Deva, and treated his citizens in a proper manner. He also invited the guests in a proper manner, and provided proper facilities to them. During his rule, with the grace of Lord Narasimha, rain was showered in all the seasons and food crops were grown properly. Lord Narasimha was very much satisfied with the rule of Prahalada, and blessed him.

PRAHALADA’S PENANCE IN THE FOREST

Prahalada’s cousin was Andakasura, and he was a powerful demon. Once he defeated Prahalada and began to rule the kingdom of Prahalada. As per the advice of Rishi Narada, Prahalada went to the forest and performed meditation on Lord Vishnu for a few months and increased his powers, and then he fought with Andakasura and defeated him, and then he again become the king for his kingdom.

GIVING HIS DIVINE POWERS TO INDRA

Once when Indra had asked to sacrifice all the powers of Prahalada, as a boon to him, the holy Prahalada had also done like that. Due to that, a divine demi god emerges from the body of Prahalada, and went along with Lord Indra to the Indra Loka.

DEATH OF VIROCHANA AND BRINGING MAHABALI INTO POWER

Prahlada’s son was Virochana, and he was cunningly killed by the Devas. Virochana’s son Mahabali was grown under the custody of his grandfather Prahalada, and in due course, he has become a famous king.

VAMANA AVATAR AND BALI’S STAY AT THE SUTALA LOKA

Once Mahabali fought with Indra, and defeated him, and when he was about to be the leader of the Indra loka, Lord Vishnu took the form of a small boy, who is popularly called as Vamana, went to the place of Mahabali while he was performing Yagna, and asked him to give three foot of land as gift to him. Then Vamana took a gigantic shape and covered the entire universe, and also pushed Mahabali into the Sutala Loka, one of the underworlds situated in the bottom of the earth. During that time, Prahlada also joined with Bali and both of them began to live in the Sutala Loka as per the instructions given by Lord Vamana.