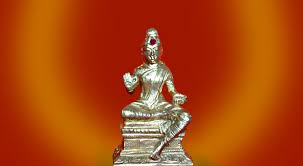 During the Vedic period women were assigned a very prominent and high place in society and shared a equal standing with the menfolk. The Hindu philosophical concept of Shakti or the feminine principle of energy was greatly revered and there were scholars and highly intelligent women who chose the path of Vedic studies like Gargi, Maitreyi, Lopamudra, Ghosha etc.

Lopamudra was the wife of Sage Agasthya. Legend says that once the Devas and Asuras were at war with each other. Many Asuras were killed in battle and a few of them hid themselves in the ocean. Indra,the Lord of the Gods gave an order to Agni the God of fire to pursue them and destroy them. Thinking that destroying them would destroy all the sea creatures Agni returned to Indra and informed him that he had let them go rather than hurting the creatures in the sea. Indra was angry that Agni had failed to do his duty hence cursed him to be reborn on earth as Sage Agasthya. He was a great sage and a man of extraordinary spiritual power. Once it is said that when he was visiting heaven he saw his deceased ancestors with their head downwards. This was a sign of them going to hell. Agasthya was disturbed and when asked the reason they said that there was no lineage to continue as he was not married and had no child hence it was Agasthya’s fault. For this purpose he embarked on an unusual course of action. By his yogic powers he created a female who would possess all those characteristics and virtues that would be appropriate in the wife of a renunciate. Meanwhile the King of Vidharbha was noble and virtuous but being childless he was undertaking penances for the gift of a child. Agasthya through his divine powers came to know the plight of the King and arranged for the child to be born as his daughter. The child was named Lopamudra and she grew up in the lap of luxury with the best possible education.

When she grew up and reached marriageable age Agasthya approached the King and asked for her hand in marriage. The King was stunned as Agasthya was a renunciate but Lopamudra was insistent that he accept the proposal. Already understanding his daughter’s strength of mind and character, the King agreed and Lopamudra left the riches of the palace to live in the forest at the hermitage of Agasthya. She was a dutiful wife and obeyed his every wish and served him faithfully. When Agasthya told her that he could never give her a royal life Lopamudra asked him to give her the wealth of his knowledge. Lopamudra is said to have written a two stanza hymn asking for Agasthya‘s love and attention as he was always immersed in his austerities. Agasthya asked Lopamudra if she wanted to bear many sons who had mediocre powers or one son who would be extraordinarily powerful. Lopamudra chose one son whom they named Dridhasyu and who later on became a great poet. In this way Agasthya is said to have fulfilled his duties to his pithrus and helped them to go to heaven. The Rig Veda includes long dialogues between Agasthya and Lopamudra which reflects on the great intelligence and character of Lopamudra. It is said that both of them together were renowned for spreading the eminence of the Lalitha Sahasranama which is the thousand names of the Divine Mother.

In the Vana Parva section of the Mahabharata there is a mention of Sage Agasthya and his wife Lopamudra performing penance at Haridwar. Her greatness and purity is recorded in the annals of Indian history and her name is always mentioned whenever there is reference to women who were epitomes of intelligence, goodness, servitude and devotion. It is said that Lopamudra has reincarnated as the sacred river Kaveri in present times.