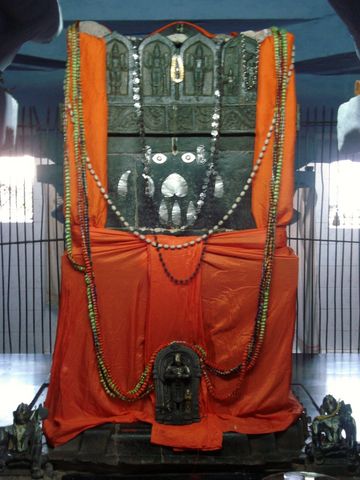 Satyanidhi Tirtha was a great Madhwa philosopher, Guru and saint. He served as the pontiff of Shri Uttaradi Mutt from 1638–1660. His birth name was Raghupathyacharya. His life history is available from the holy texts Gurucharya and Satyanidhivilasa.

He was born in a holy Brahmin family in Bijapur District at Karnataka. He studied the divine texts under a great scholar. He attained Samadhi in the year 1660, and his holy Brindavana is situated at Kurnool District. His guru was Satyavrata Tirtha, and his disciple and successor was Sri Satyanatha Tirtha.

He has travelled to many holy temples and got the divine darshan of the deities. He was against caste discrimination, and equally treated everybody. He considered everyone as the forms of the almighty and greatly respected the people and behaved with them with kindness.

He used to distribute the holy Prasad to the devotees after offering it to the deities. Through his kind approach, lot of devotees were relieved from their problems and practised the habit of worshipping the god regularly. Still his Brindavana attracts hundreds of devotees on a daily basis, and during festival days, thousands of devotees used to throng to his divine Brindavanam to have a glimpse of him.

Let us worship this holy Madhwa saint and be blessed.