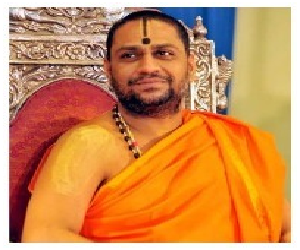 The present pontiff of Mantralayam Sri Raghavendra Swamy Mutt is Sri Subhudendra Teertha. Previously he was serving as the Diwan of the Raghavendra Swamy Mutt, and he has become a saint in the year 2013, and he took charge of the administration of the Mutt in the year 2014 from Sri Suyateendra Teertha, and became his successor. His birth name was Raja S. Pavamanacharya.

He was one of the main preachers of the Advaita Philosophy of Madhwacharya, and he conducted spiritual discourses among the people, and inculcated the “SRI RAGHAVENDRA BHAKTI” into their minds, and he participated in the debates with various learned scholars and also won in the debates.

He is a learned pundit and an expert in Vedas, Puranas, Ithikashas and other divine texts. He was born in a pious Madhwa family, and was proficient in regional languages, and was a great devotee of Guru Raghavendra from his young age. Daily he is doing Sri Moola Rama Puja with sincere devotion in mind, and distributing the Holy Prasad after the completion of the Moola Rama Puja.

Daily free food is offered to all the devotees in the Mantralayam Mutt in the afternoon and in the night. The food would be served in a pleasing manner to the devotees, and it would be very delicious, and the holy food would cleanse our sins, heals our diseases, and we would get the divine blessings of our holy Guru Sri Raghavendra Swamy.

Sri Subhudendra Teertha’s contribution to the spiritual world is as follows:

Let us worship the great saint of Mantralayam and be blessed.