Throughout the Vedic period in India women have been given the highest level of respect and freedom. They were given opportunity to reach their highest potential and there were women seers like Gargi, Maitreyi, Lopamudra etc who had reached an exalted state of spiritual realisation and were respected and venerated. They were called Brahmavadinis or the revealers and speakers of Brahman. Women stood for the foundation of moral development and were a decisive force in spirituality.

Maitreyi was the daughter of Mitra Rishi and the niece of Gargi and was born in Mithila. She was very well versed in the Shastras taught to her by her father and from a young age was unattached to material things and had reached an exalted state of spiritual purity. She wanted to be a spiritual disciple of Sage Yajnavalkya who was a Rishi and a householder as was common in those times and practice her sadhana. Sage Yajnavalkya was already married to a devout woman Katyayani who bore him three sons and whose main interest lay in her husband, children and home but seeing the spiritual fervour of Maithreyi his wife  Katyayani agreed that she should be married to the sage to further her spiritual development. It is said that such was her spiritual personality that she enhanced Yajnavalkya’s spiritual stature, knowledge and growth. Maitreyi composed ten of the thousand hymns in the Rig Veda.

Dialogue between Yajnavalkya and Maitreyi

Yajnavalkya at a particular stage of his life wished to give up his worldly life and become an ascetic. He called both his wives to give them his worldly possessions. There ensued a dialogue between Yajnavalkya and Maitreyi which became famous and forms the second and fourth chapter of the Brihadaranyaka Upanishad. Maitreyi reasoned that if her husband was willing to leave everything behind, it must be for something far greater. She asks him if having enough wealth could make her immortal. Yajnavalkya is very happy with her profound question. He advises her on the connection between existence, bliss and thought in the three worlds to the eternal indestructible Self. He traces the roots of all bliss to the Self and explains that nothing exists apart from the Self. This is the Ultimate Statement of the Advaitha philosophy, the Chudamani or the crest jewel. Hearing Yajnavalkya’s explanation on the doctrine of the soul and the knowledge for attaining immortality, Maitreyi attains supreme bliss.

By hearing Yajnavalkya’s discourse Maitreyi dived deep into spiritual understanding and gained the spiritual knowledge necessary to attain moksha and liberation from the infinite cycles of birth and death. She showed all women the way to achieve the heights of knowledge simply by carefully listening and practicing the Vedic path. It was the Self or Atma that made a person dear to another and which was the basis of all existence. 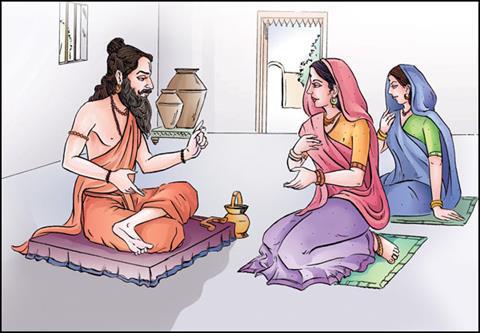