In: Gurus, Modern Thinkers
With: 0 Comments 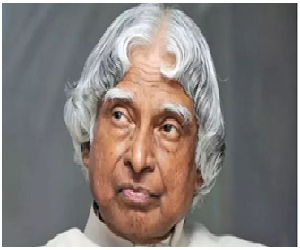 Avul Pakir Jainulabdeen Abdul Kalam (1931 –2015) was an aerospace scientist and served as the President of India from 2002 to 2007. He was born and brought up in Rameswaram, Tamil Nadu and after completing his aerospace engineering course, he worked as a scientist at the Indian Space Research Organisation (ISRO), and he played a major role in conducting various nuclear tests.

Due to his good manners and his simplistic approach, he was referred to as the “People’s President”, and apart from his routine work, he also wrote poems and texts on various subjects.  He received the Padma Bhushan, Padma Vibushan and Bharat Ratna awards, due to his great contribution made to our country India.

While Kalam was delivering lectures at the IIM, Shillong, he was suddenly collapsed and died due to a cardiac arrest in the year 2015, and thousands of people mourned for his death, and attended the funeral ceremony held at his hometown of Rameswaram, and he was buried with  full state honours.

Dr.Abdul Kalam was born in the year 1931 in a pious Tamil Muslim family in Rameswaram. His father owned a boat, and earned his livelihood by taking the Temple pilgrims at his boat, and used to drop them at the Rameswaram Shiva Temple.  In course of time, his family has suffered from severe poverty, and due to that, young Kalam has done lot of small works in order to maintain his family.

During his school days, Kalam was considered as a bright student and after finishing his school education, he went to the then Madras, now called as Chennai,  in the year 1955 and studied aerospace engineering in Madras Institute of Technology.  After finishing his course, in the year 1960, Kalam joined as a scientist in the Aeronautical Organization, and gave his good contribution in the Aeronautical field.

After his successful completion of the five years period as a President, Kalam became a visiting professor at the ITM at various branches.

The Dr.Abdul Kalam Memorial was built in memory of Kalam in Rameswaram, Tamil Nadu.

Kalam was well appreciated for his simple lifestyle. He didn’t saved much, but he had earned a lot of good karmic deeds through his noble acts. He was interested in doing social services, and hence he gave most of his belongings for charities.

Kalam respected all the religious leaders, and he was given spiritual guidance by Sri Pramukh Swamiji, who served as the President in Swami Narayan Mandir at Sarangpur.

Being born as a Holy Muslim, Kalam used to do daily namaz and observed fasting during Ramzan Festival season.

Even though, now he is not alive, his name and fame would never diminish, and his popularity is still increasing day by day.